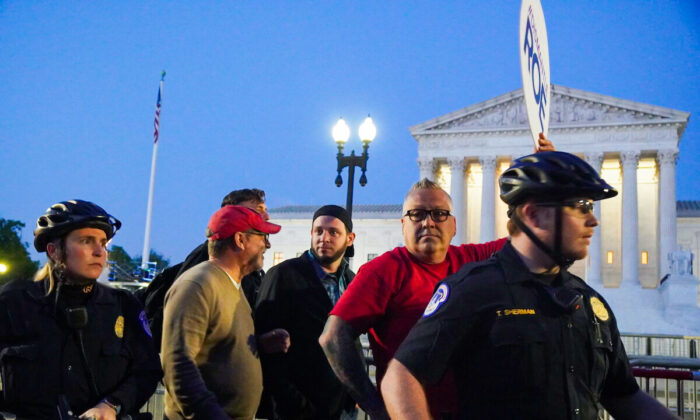 WASHINGTON—Pro-abortion protesters outside the Supreme Court attacked four pro-life Christian activists who showed up to counterprotest.

The protest was on the left side of a set of barricades that took up most of the center of the Supreme Court grounds.

“The police came in after I was punched,” he said. “The person that punched me is no longer here that I can see.”

To protect them, police surrounded the four pastors, forming a line between them and the pro-abortion protesters.

The pro-abortion protesters alternated between chanting toward the men, mocking them, and telling each other to ignore them.

“Whose streets? Our streets!” the protesters chanted.

“Ignore these [expletives],” one protester said.

After surrounding the police line for about 15 minutes, pro-abortion protesters started walking to the right side of the central barricades. They were trying to move away from the men.

The pro-life men chose to follow. Still surrounded by police, they walked to the center until police refused to allow them to move further.

Officers told the group that allowing them to approach the 300 pro-abortion protesters would put them in danger.

For several tense minutes, the four men stood surrounded by police while several protesters aggressively yelled at them.

“You walked into the middle of a peaceful protest,” another said.

The crowd chanted “You don’t matter!” at the four pro-life protesters.

The crowd also blamed the police.

“You’re instigating this,” one pro-life protester said to the police.

“I have every right to stay here,” one of the men said to the protesters.

Someone in the crowd threw a small object at the four men.

Then police ordered the four pro-life men to leave and moved them away from the crowd.

He said the police weren’t allowing them to continue protesting outside the Supreme Court.

“They were telling us we couldn’t go into this area and express our First Amendment rights,” Mahoney said.

For a moment, the four men discussed how to document the police action so they could file a lawsuit.

“We want to be over there to exercise our freedom of speech, our First Amendment rights, and the police are telling us that we cannot go where the others can go, and so they are treating us differently than they’re treating those,” Dickson said.

Then the men circled back to approach the pro-abortion protest crowd from the right, still accompanied by a large group of police officers.

The police formed a line between the crowd and the pro-life men. Then the four men asked to move through the police line.

Police refused the men’s request, citing concerns of violence if the men crossed the line.

“We’re very confident that if we let you guys go in there, there’s going to be violence, and we’re not going to allow this, for public safety,” an officer told the men.

“For their safety and your safety,” an officer replied.

Several pro-abortion protesters were on the side of the police line where the four men were.

“Assault! Assault! She attacked me! She hit my head!” Dickson said.

Police stood around the protester and took down her information. She cried and covered her face.

Meanwhile, other officers asked Dickson if he wanted police to arrest her and press charges.

Dickson said to police that he would offer the protester a deal. If she said why she attacked him and apologized, he would forgive her and not press charges.

“If she would apologize, if she would share with me why she did it, apologize, civil conversation, like, I don’t want to press charges,” Dickson said. “But if that situation doesn’t happen, y’all are kind of forcing me into that box.”

At first, police resisted the offer.

“We’re not forcing you into anything. It’s your decision,” one officer said. “What I’m saying is, we’re not bringing her over here.”

Dickson kept debating with police to offer the protester a chance to apologize. The four men offered to stand six feet away while talking with the woman.

Then Dickson took matters into his own hands. He shouted to the protester.

“Ma’am, I would like to offer you forgiveness, but these officers are not letting me. I am willing to forgive you, but I need to talk to you,” Dickson shouted over shrieks from the crowd. “Police are preventing my freedom of speech and preventing my religious belief of wanting to talk to you and try to reconcile the situation without pressing charges.”

Police told the female protester that Dickson said he wouldn’t press charges if she would apologize.

At first, the female protester told the police that she would not apologize.

But as officers told her to stand up and prepared to arrest her, she said she had changed her mind.

“Wait, wait! Can I change my mind?” she said in a panicked tone. “I would like to do that.”

“I apologize,” she said.

But when Dickson asked her why she had hit him, she refused to answer.

“She apologized. Are we done here?” an officer said.

Police called the woman back.

“But you just said I was free to go!” she said frantically.

Dickson then demanded the female protester’s arrest. But the police didn’t take her into custody.

“We’ve not arrested her, so now we’ll have to get a warrant. We will still pursue it if you want to,” one officer said to Dickson.

“I wanted an explanation,” Dickson said.

Then he tried to debate with the police.

“You’re playing a game. We don’t play this game,” an officer replied. “We abide by the law. You said whether you want to press charges, or you don’t.”

After that interaction, the four men left the protest.

As they walked away, protesters started chanting again.

“Whose streets? Our streets!” the crowd yelled.