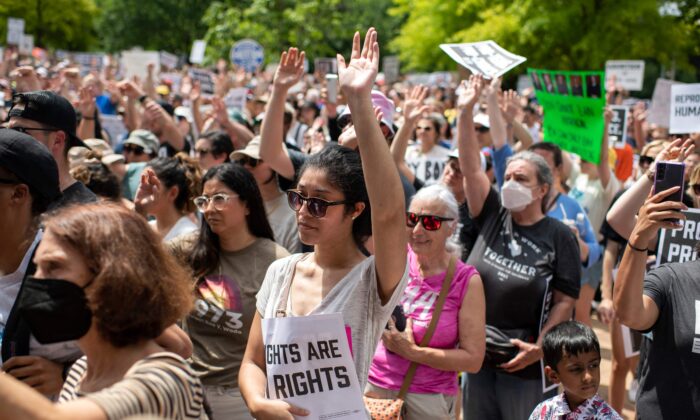 Protesters gather for A Texas Rally for Abortion Rights in Houston on May 7, 2022. (Mark Felix/AFP /AFP via Getty Images)
US News

Pro-Abortion Activists Hold Protests in Cities Around US, Drawing Concern From Some GOP Officials

Protests were staged in many cities across the United States over the weekend as pro-abortion activists sought to ensure their right to end an unwanted pregnancy, after a leaked draft opinion of the Supreme Court indicated that the court was set to overturn the 1973 Roe v. Wade decision, which declared access to abortion to be a constitutional right.

On May 7, a group of pro-abortion activists protested outside the Basilica of St. Patrick’s Cathedral in Manhattan, coming face to face with a group of pro-life supporters carrying out their monthly demonstration, according to Fox News. A female pro-abortion protester screamed, “I’m killing the babies,” while another member of her group was seen holding up a sign with the words “abortion is a gift.”

The New York Young Republican Club took to Twitter to recount the incident outside the cathedral.

“We’re proud to see members of our Catholic Caucus @CatholicNYYRC standing up for their beliefs and for the fundamental rights of all unborn Americans,” the club wrote. “Men sitting in the church’s rear pews were asked to pray outside to ensure that the leftist horde would not overrun the building.”

“What we’re seeing here is evil. We cannot allow abortion to continue in Idaho. #ProLife,” McGeachin wrote on Twitter.

In Maryland, about 100 pro-abortion activists took their protests to the homes of two conservative Supreme Court Justices, Brett Kavanaugh and John Roberts, on May 7. ShutDown DC, a left-wing group, is currently scheduled to hold a protest outside of another Justice’s home, Samuel Alito, who wrote the draft opinion, on the evening of May 9.

“This is crossing the line and unacceptable,” Rep. Andy Biggs (R-Ariz.) wrote in response to the protest at Kavanaugh’s home. “This type of intimidation and harassment has no place in America.”

“Anyone making threats of violence should be arrested & prosecuted,” he wrote on Twitter.

On May 8, vandals threw Molotov cocktails into the office of anti-abortion group Wisconsin Family Action, setting the place on fire, according to the Wisconsin State Journal. The phrase “If abortions aren’t safe then you aren’t either” was sprayed with graffiti on the building’s outside wall.

Julaine Appling, president of Wisconsin Family Action, issued a statement on May 8 saying the attack was “directly provoked” by the leaked draft opinion.

“Apparently, the tolerance that the left demands is truly a one-way street. Violence has become their answer to everything,” Appling wrote. “But this attack fails to frighten us, and instead steels the resolve of law-abiding, common-sense, every-day folks to stand up and push back.”

Rep. Steve Scalise (R-La.) took to Twitter to call on the Democrats to “immediately condemn” the attack in Wisconsin.

In response to the attack, Rep. Marjorie Taylor Greene (R-Ga.) wrote on Twitter: “This will get worse and we will not be intimidated.

“Protecting abortion in order to continue sacrificing babies by slaughtering them in the womb is everything to the violent and godless left.”

Before the different protests over the weekend, a shadowy group calling itself “Ruth Sent Us” published several inflammatory mobilization posts on Twitter.

On May 3, the group called on pro-abortion supporters to assemble outside of the homes of the “six extremist Catholics set out to overturn Roe” and “stand at or in a local Catholic Church Sun May 8.”

“We will remain outraged after this weekend, so keep praying,” the group wrote on Twitter days later. “We’ll be burning the Eucharist to show our disgust for the abuse Catholic Churches have condoned for centuries.”

In Longmeadow, a town in Massachusetts, nearly 90 local residents held a rally on May 8 protesting against the possibility that Roe v. Wade could be overturned, according to Western Mass News.

According to The Tennessean, hundreds turned out to protest in Nashville over the past weekend, with one protester holding up a sign with the words “All I want for Mother’s Day is government out of my womb!”

Some students at the University of Tennessee also held a protest at the school’s campus on May 8, according to the university’s newspaper, The Daily Beacon.