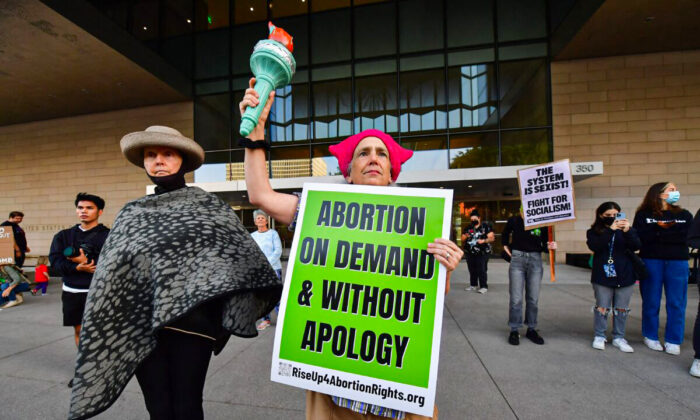 A protester holds the torch from Lady Liberty alongside other pro-abortion protesters gathered outside the U.S. Courthouse in downtown Los Angeles, Calif., on May 3, 2022. (Frederic J. Brown/AFP via Getty Images)
Viewpoints

Pro-Abortion Absolutism and Its Consequences

No right is absolute. The state can curtail speech for compelling reasons, the old “yelling fire in a theater” cliché. Religious liberty can be restricted, too—just ask the Christian florist found financially liable because her faith forbade serving a same-sex wedding.

The Second Amendment guarantees the right to keep and bear arms, to be sure, but the government can legally forbid private citizens from owning machine guns. But now, the first absolute right is being conjured—unconditional access to abortion at any time, for any reason, and without cost.

“Safe, legal, and rare” was always more a political slogan than a policy prescription, but at least it acknowledged the moral element in the abortion question. It’s a sign of our amoral times that the contemporary guiding principle of pro-choice activism is “Free abortion on demand without apology.”

Such abortion absolutism is already the law in several blue states. Thus, a new Colorado statute states starkly, “A pregnant individual has a fundamental right to continue a pregnancy and give birth or to have an abortion and to make decisions about how to exercise that right.” Note that there are no restrictions as to viability.

Meanwhile, House Democrats are pushing proposals that would autocratically impose an absolutist policy on the entire country. If passed, pro-life states such as Indiana—which just restricted abortion (with some exceptions)—would have their democratically enacted policies preempted by federal fiat.

The international technocracy also is pushing abortion absolutism. Thus, the World Health Organization recently published its “Abortion Care Guideline,” which states categorically that abortion should be accessible “on the request of the woman, girl or other pregnant person.” Moreover, the guideline states that there be no restrictions “based on gestational age limits.”

Abortion absolutism is a radical departure from the once well-accepted idea that nascent human beings—at least at some level—deserve respect and protection. This isn’t only alarming in itself, but also portends even more radical anti-fetal public policies to come:

Experimenting on the Unborn

Embryonic stem cell research (ESCR) has long treated early embryos as fodder for experiments. But at least there were established limits as to what could be done, such as the “14-Day Rule” requiring experimentation to cease after two weeks. But now, even that minor restraint has been repealed by the International Society for Stem Cell Research, meaning that no time limits govern when the unborn can be experimented upon.

This change could open the door to live fetal experimentation or the use of fetuses as sources of organs—a concept known as “fetal farming.” Indeed, the legal groundwork to permit such atrocities is already being laid. Vermont recently enacted a law that states in part, “A fertilized egg, embryo, or fetus shall not have independent rights under Vermont law.” (The Colorado law referenced above has a similar provision.)

Notice that the law strips all moral status from the unborn without regard to an existing pregnancy, meaning that even late-stage fetuses could be used experimentally, particularly once artificial wombs come online and they can be kept alive for extended periods. And don’t think scientists would never do such an awful thing. In the 1960s, babies were kept alive after late-term abortions for hours in gruesome experiments funded by the National Institutes of Health.

If abortion is an absolute right, the state must concomitantly guarantee easy access to terminations. Since many doctors refuse to abort, abortion absolutism thus means that it will become necessary for the government to force doctors to participate in terminations, even if they are morally opposed.

The coercion campaign has already started. Professional medical and bioethics journal articles have repeatedly attacked “medical conscience” as a violation of patients’ rights. For example, the influential bioethicist Ezekiel Emanuel wrote in the New England Journal of Medicine that dissenting doctors who wish to refuse abortions (or other legal controversial medical procedures) “have two choices: select an area of medicine, such as radiology, that will not put them in situations that conflict with their personal morality or, if there is no such area, leave the profession.”

Not coincidentally, the WHO’s “Abortion Care Guideline” also calls a doctor’s right of medical conscience an “indefensible” interference with the absolute right to an abortion. The obvious goals of such advocacy are to increase the number of abortions and drive pro-lifers out of medicine.

Opening the Door to Infanticide

Abortion absolutism has also fueled advocacy for the next logical step: permitting infanticide. Indeed, several notable bioethicists have repeatedly argued that infanticide is morally equivalent to abortion. Princeton’s notorious Peter Singer has stated many times that since neither an unborn nor a newborn baby is a “person,” infanticide and abortion are morally indistinguishable. Similarly, a controversial essay published in the Journal of Medical Ethics argued in favor of what the authors of the article dubbed “after-birth abortion,” in order to “emphasize that the moral status of the individual killed is comparable with that of a fetus.”

The authors argued, “The moral status of an infant is equivalent to that of a fetus in the sense that both lack those properties that justify the attribution of a right to life to an individual.” If that is true—and the right to abortion becomes absolute—why would it not also include an unconditional right to kill unwanted newborns? Such awful acts are already permitted in the Netherlands against terminally ill or seriously disabled newborns under a euthanasia guideline known as the Groningen Protocol.

By rejecting the crucial moral principle that human life has inherent value simply and merely because it is human, abortion absolutism undercuts the West’s self-definition as a moral society. If this anti-life radicalism prevails, no unborn child will be safe during a pregnancy, and perhaps, not even after birth. Nor, for that matter, will nascent humans be shielded from being used as objects in utilitarian experimentation.

If a society is truly judged by the way it treats its weakest members, we risk historical infamy if abortion absolutism prevails in establishing our public policies and social mores.