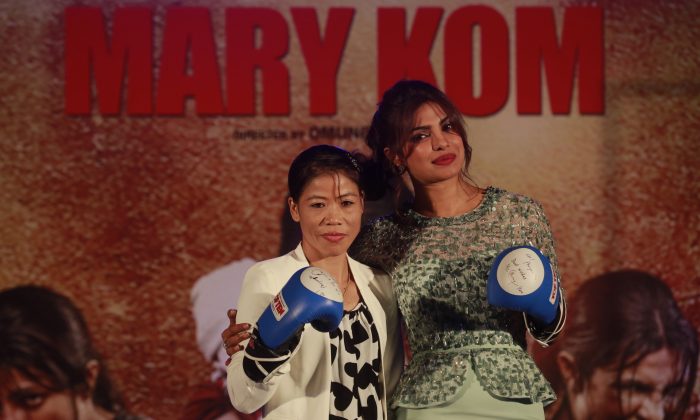 Bollywood actress Priyanka Chopra, right, along with Indian boxer Mary Kom pose for a picture during a promotional event for the upcoming movie Mary Kom in Mumbai, India, Wednesday, Aug 13, 2014. The movie is based on the life of the Indian boxer Mary Kom, and is scheduled for release on 5th September.(AP Photo/Rafiq Maqbool)
Entertainment

In “Mary Kom,” which is based entirely on the real-life events of the boxing champion Chungneijang Mary Kom, Chopra said that she had to take a punch or two during the filming of the movie.

“If Sylvester Stallone could do it in ‘Rocky,’ then I can do it,” Chopra said about getting punched during filming.

During a press conference of her film, that premiered in Toronto on September 4, 2014 as part of the Toronto International Film Festival (TIFF), Chopra said that she’s always looking for challenging roles to play, starting from the age of 19 when she began acting.

“I always try to push the envelope,” Chopra said.

But over the years she’s become a recording artist, received the title of Miss World, and become one of the highest-paid Bollywood actresses, which also means that she’s selective with her roles.

“You have to come to me with a whammy,” Chopra said. “If I feel like I want to go and watch the movie, I do it,” she said.

“I have variety, I get bored of doing the same thing.”

And even though it was a debut film for director Omung Kumar who worked on the script for some three years, there was commitment on all fronts to learn the art of boxing and make the fighting scenes seem realistic. Other challenges included having a female lead in a drama based on a sport that’s not as popular in India as some others.

“Sport in the country is very cricket driven,” Chopra said.

To overcome the challenges the team worked hard on learning the art of boxing, which meant that they had professional boxers come in for training and even starring in the film.

While working on ‘Mary Kom’ Chopra was also working on other films, which meant that her schedule was very intense with 14 hours of shooting, followed by 2 hours of training, and another 2 hours of boxing. But this was nothing compared to the grief she was going through after her father died.

“I started filming the movie about four days after my dad passed away,” she said. “I channeled all my grief into this movie, and that’s what drove me,” Chopra said.

“This film is that much personal to me on that many levels,” she said.

In the end, Chopra proved that she’s a real fighter who doesn’t give up easily, just like the real boxer Mary Kom who faced so many challenges during her professional and personal life.

“One thing that i did take away from this movie that will stay with me for the rest of my life is that anything’s possible,” Chopra said.