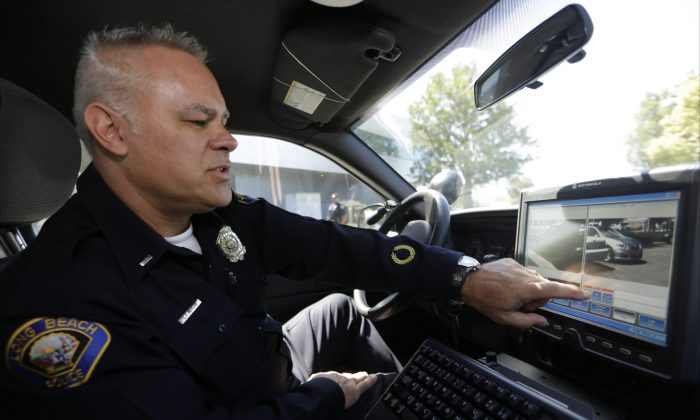 License plate scans have been at the forefront of a privacy debate in recent years.

Civil libertarians and lawmakers are raising concerns about the latest practice, arguing that there are few, if any, protections against abuse and that the private databases go back years at a time when agencies are limiting how long such information is stored.

Some argue police should get a warrant from a judge to access the databases, much as they would if they wanted to obtain emails.

“The public is understandably concerned about how this information is going to be used,” said Chuck Wexler, executive director of the Police Executive Research Forum, but for police, the databases, just like surveillance cameras, are an important investigative tool.

License plate scans have been at the forefront of a privacy debate in recent years.

The license plate reader companies say their scans are useless without access to motor vehicle department rolls—which police have. They say lawmakers should focus on strengthening data-access laws, rather than eliminating police tools.

The largest firm, Livermore, California-based Vigilant Solutions, has filed a lawsuit or actively lobbied in at least 22 states and the District of Columbia for its technology, said Todd Hodnett, founder of Digital Recognition Network, which provides the data it collects to law enforcement through its sister company Vigilant.

He said as of June that roughly 30,000 law enforcement officers nationwide subscribe to their LEARN database.

Hodnett said when he tells legislators that the data his company gathers is protected, “I can’t tell you how many times I’ve heard legislators say this sounds like a solution in search of a problem.”

The plate readers can collect 1,600 plates an hour. Vigilant has collected scans since 2007 and has more than 3 billion license plates, growing at a rate of 100 million a month from every major metro area. There are roughly 254 million registered vehicles in the United States.

Law enforcement agencies have acknowledged privacy concerns over how long they store scans—which includes a photo of the vehicle, its plate, and a GPS and time marker—and have voluntarily instituted policies to limit that storage.

The Long Beach, Calif., police have used the license plate technology since 2005 and in December signed on with Vigilant. The department retains its own scans for two years, primarily because of server space and funding, like many other agencies.

“If somebody has more [scans], why would we not look at it?” Lt. Chris Morgan said.

Departments with retention policies, however, are able to still use private databases, which keep their scans forever, calling up information they wouldn’t have access to otherwise. It is up to departments to activate any limits in the private database to prevent employee access.

“There needs to be a balance,” said Morgan, who calls the technology the department’s No. 1, go-to investigative tool. “It obviously adds value. We know there’s value there. We know that it’s something we don’t want to go away. Does it need to be regulated? Maybe.”

When state governments have tried to ban private license plate scan collection and use, for example in Utah, they’ve faced a lawsuit arguing that the law violated the First Amendment by preventing private companies from taking photos of publicly visible license plates.

They ultimately amended their law to only bar law enforcement from using the privately collected scans.

Civil libertarians say they are concerned that police can use the database to establish a detailed pattern about a person’s behaviors, habits, and lifestyle, such as what mosque they frequent, what strip club, or what gun store they shop at.

Requiring a warrant to access such databases “provides a little bit of oversight,” said Kade Crockford, director of the technology for liberty program at the ACLU of Massachusetts.

The roots of the license plate scanning business lie in the repossession world. DRN provides license-plate snapping cameras to tow trucks and repossession workers. Banks and insurance companies have used it to track down tens of thousands of vehicles that are no longer being paid for.

Vigilant this year stopped offering a limited free search to thousands of law enforcement agencies in hopes that they’ll sign on for a paid version. Vigilant won’t disclose client numbers or the value of its law enforcement contracts. A review by The Associated Press, however, of nearly a dozen publicly available contracts indicates a value well into the millions.

The Los Angeles County Sheriff’s Department, the nation’s largest sheriff’s department, is participating. For smaller departments, which can’t afford to build up their own databases, the sheer amount of data found in the Vigilant system can be a game changer.

The Fairfield, Conn., police department had few clues last year after a man wearing a hoodie grabbed a pregnant woman’s purse at a gas station and jumped into a car that dragged her along the road.

Though the department has its own data collected from a few cameras, nothing came up.

Police were able to use the Vigilant database to identify a car spotted less than a quarter mile from the crime scene. Officers were sent over, and an hour later, pulled over a man wearing a hoodie and a woman, both of whom confessed to the crime.

“We’ve had tremendous success with it,” said Deputy Chief Chris Lyddy. “Usually, I first go to the private data if I’m looking for somebody.”