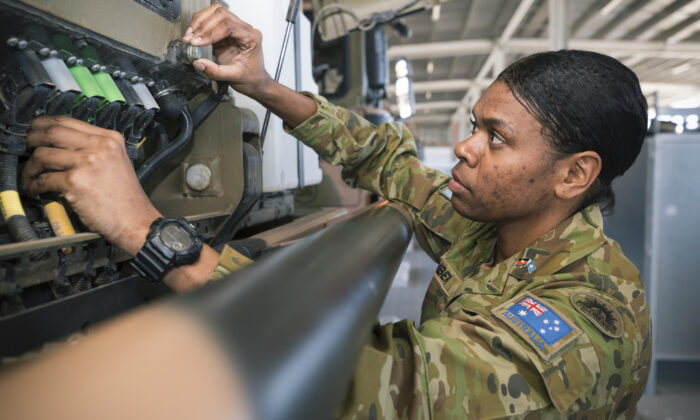 Private Amber: From Torres Strait Islands to the Army

As Australia honours its Aboriginal and Torres Strait Islander citizens during NAIDOC week, the Australian Defence Force has shared a story about one of its Indigenous personnel finding a second home amongst its ranks.

Private Pamela Amber is a Torres Strait Islands woman of Panaygal and Samu heritage who achieved her dream of joining the army and is now mentoring other indigenous kids.

Although it was hard to leave her tropical island home, Private Amber said that she wanted to challenge herself by joining the army to “see where it could lead me.”

At 19-years-old, she mustered her courage, left the life she knew, and enlisted as a driver in 2015.

“Initially it was quite hard, especially being away from home—coming from a small community on an island, then moving to Cairns and adapting to city life, then joining the military and adapting to military life,” she told the ADF.

While going through the challenges of adjusting to life in the military, Private Amber would soon learn that she wasn’t alone as an Indigenous defence member.

“I didn’t know there were many Indigenous soldiers, sailors or airmen until I attended a Defence Aboriginal and Torres Strait Islander National conference (DATSIN) in Canberra,” she said.

“That’s when I found out there was a whole heap of us Indigenous mob in the Defence Force.

“Being Indigenous, when you see another Indigenous member within Defence, you have that natural instinct of connecting, and that’s the best thing about us,” she said.

She was thrilled the number of Indigenous personnel in Defence was increasing, the ADF reported.

Private Amber’s traditional indigenous culture is a “big part” of her life, and that of her ancestors, family and people.

“I think we need to uphold that strong heritage of our culture, and when younger generations come in the future, they will look up to us,” she said.

Private Amber found her second home in the 3rd Combat Service Support Battalion and is now based at Lavarack Barracks in Townsville, another 350 kilometres south of Cairns.

She’s now involved in mentoring young Indigenous people through an ADF program and has worked over the past three years with Tiwi Islands Youth Girls helping to guide participants and encourage them to be confident and to grab opportunities—like she did.

“My message to young Indigenous people is: take it as it comes and give it go. You never know where it can lead you,” Private Amber said.