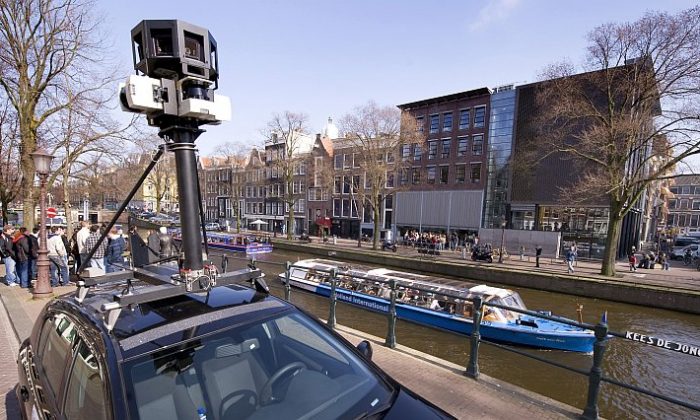 A Google Street View camera fastened on top of a car in Amsterdam is seen in this file photo. Google has recently been fined $25,000 by the FCC for gathering data from private Wi-Fi networks around the world. The advocacy group Electronic Privacy Information Center (EPIC) wants the Justice Department to investigate further. (Toussaint Kluiters/AFP/Getty Images)
US

Google is once again on the hot seat for collecting user data through it’s Street View system. The Federal Communications Commission (FCC) announced April 13 it will fine Google $25,000 for obstructing investigations into whether it was violating the Communications Act of 1934. But some don’t think this is enough, and the Electronic Privacy Information Center is calling for another investigation.

The issue caused a stir in 2010, but things have since quieted down. It was found that between May 2007 and May 2010, the vehicles used to collect data for Google Street view were pulling in a lot more than just photographs. The cars were collecting data from private WiFi networks around the world—including emails, text messages, passwords, and peoples’ online browsing history, according to the Federal Communications Commission (FCC).

Investigations were launched in July 2010 by Attorney General Richard Blumenthal, on behalf of a 38-state coalition. Similar investigations were started around the world—including in Canada, Europe, and Australia.

According to the FCC, Google initially denied it was collecting the data when it was asked by European data collection authorities in 2010.

But Google later admitted it was collecting the data, stating on its official blog it was “mistakenly collecting samples of payload data” from Wi-Fi networks without password protection, and added “we never used that data in any Google products.”

The code in question, they added, was left over from an experimental Wi-Fi project they started in 2006 that “sampled all categories of publicly broadcast Wi-Fi data.”

At the time, Blumenthal said in a press release, “Google’s responses continue to generate more questions than they answer.” And what has taken place since then has raised even more questions.

“For many months, Google deliberately impeded and delayed the bureau’s investigation by failing to respond to requests for material information and to provide certifications and verifications of its responses,” states the latest document, where the FCC explains why Google is being fined $25,000.

Despite Google not cooperating well enough during the investigations, the FCC says it will not take “enforcement action” against Google for its data collection. Its reason is because “There is not clear precedent for applying Section 705(a) of the Communications Act to the Wi-Fi communications at issue here.”

It also states that the investigation was halted since the Google engineer who wrote the offending code declined to testify (which was protected by his constitutional right). Because of this, “significant factual questions bearing on the application of Section 705(a) to the Street View project cannot be answered on the record of this investigation,” states the FCC.

EPIC states the investigation should reopen, since the FCC’s investigation “was inadequate and did not address the applicability of federal wiretap law to Google’s interception of emails, usernames, passwords, browsing histories, and other personal information.”

In other words, the FCC investigation was only based on whether Google violated the Communications Act of 1934. The next investigation, EPIC requests, should focus on whether Google violated the Wiretap Act. “Many countries have found Google guilty of violating national privacy laws, and a U.S. federal court recently held that unencrypted wireless network communications are not exempt from the protections of the Wiretap Act,” it states.

Members of Congress have made similar requests. Blumenthal said, “Google’s interception and collection of private wireless data potentially violates the Wiretap Act or other federal statutes, and I believe the Justice Department and state attorneys general should fully investigate this matter,” according to EPIC.

Congressman Ed Markey compared the $25,000 to “a mere slap on the wrist for Google,” and is calling for another investigation, according to EPIC.