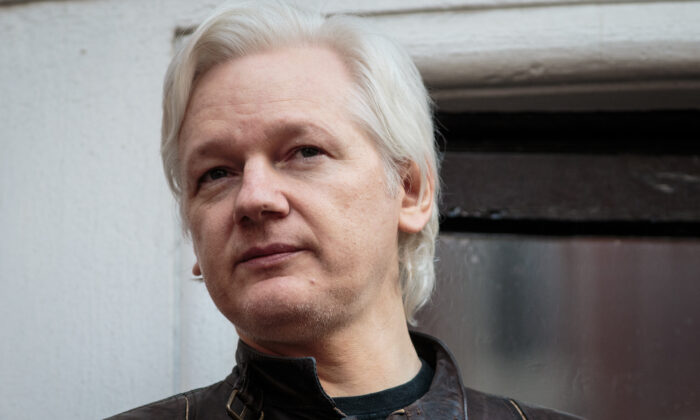 Julian Assange speaks to reporters in London on May 19, 2017. (Jack Taylor/Getty Images)
UK

The British Home Secretary Priti Patel has signed an extradition order, sending WikiLeaks founder Julian Assange back to the United States where he is wanted for publishing classified documents.

WikiLeaks said Friday was a “dark day” for press freedom and British democracy.

Assange, 50, is wanted in the United States for publishing thousands of diplomatic cables and other sensitive documents in 2010 and 2011 after they were passed to Wikileaks.

In January the High Court in London said Assange could make a final appeal to the UK Supreme Court.

But the Supreme Court said Assange’s lawyers had not raised “an arguable point of law” and refused to hear that appeal, clearing the way for extradition.

Assange, who married his South African girlfriend Stella Moris in November, has argued he will not get a fair trial in the United States. If convicted, he could face up to 175 years in jail.

On Friday a Home Office spokesman said: “Under the Extradition Act 2003, the Secretary of State must sign an extradition order if there are no grounds to prohibit the order being made. Extradition requests are only sent to the Home Secretary once a judge decides it can proceed after considering various aspects of the case.”

The spokesman added: “On 17 June, following consideration by both the Magistrates Court and High Court, the extradition of Mr. Julian Assange to the US was ordered. Mr. Assange retains the normal 14-day right to appeal. In this case, the UK courts have not found that it would be oppressive, unjust or an abuse of process to extradite Mr. Assange. Nor have they found that extradition would be incompatible with his human rights, including his right to a fair trial and to freedom of expression, and that whilst in the US he will be treated appropriately, including in relation to his health.”

U.S. prosecutors have indicted Assange on 18 criminal charges of breaking an espionage law and conspiring to hack government computers.

WikiLeaks published a U.S. military video in 2010 showing a 2007 attack by Apache helicopters in Baghdad that killed a dozen people, including two Reuters news staff. It then released thousands of secret classified files and diplomatic cables, which included critical appraisals of world leaders, from Russian President Vladimir Putin to members of the Saudi royal family.

Assange sought refuge inside Ecuador’s London embassy for seven years from 2012 until he was arrested in April 2019 for skipping bail during a separate legal battle.

He is being held in London’s high-security Belmarsh prison.

Julian Assange’s wife Stella issued a statement after hearing of the home secretary’s move, in which she said: “This is a dark day for press freedom and for British democracy. Anyone in this country who cares about freedom of expression should be deeply ashamed that the Home Secretary has approved the extradition of Julian Assange to the United States, the country that plotted his assassination.”