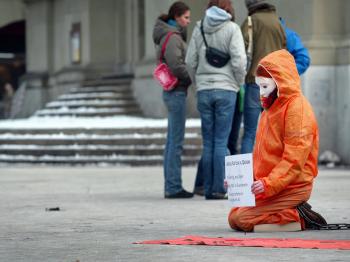 An activist of Amnesty International dressed as a Guantanamo bay prisoner protests on January 10, 2009 in Berne. (MicheleI Limina/AFP/Getty Images)
US

Joshua Philipp
Joshua Philipp is an award-winning investigative reporter with The Epoch Times and host of EpochTV's "Crossroads" program. He is a recognized expert on unrestricted warfare, asymmetrical hybrid warfare, subversion, and historical perspectives on today’s issues. His 10-plus years of research and investigations on the Chinese Communist Party, subversion, and related topics give him unique insight into the global threat and political landscape.
View profile
Follow
biggersmaller
Print
Plans to use a military weapon on Los Angeles prisoners—which blasts individuals with an invisible heat ray—was called “tantamount to torture” by the American Civil Liberties Union and the ACLU of Southern California on Aug. 27.

The jails plan to use the assault intervention device on “some of the more difficult inmate violence issues,” as it will presumably allow them to stop the inmates without causing much, if any, injury, says the letter.

“The idea that a military weapon designed to cause intolerable pain should be used against county jail inmates is staggeringly wrongheaded,” said Margaret Winter, associate director of the ACLU National Prison Project, in a press release.

“Unnecessarily inflicting severe pain and taking such unnecessary risks with people’s lives is a clear violation of the Eighth Amendment and due process clause of the U.S. Constitution,” Winter said.

The letter states that the groups “believe the employment of such weapons in this context creates a wholly unjustified risk that detainees will be needlessly subjected to excessive force—indeed, a use of force tantamount to torture, in violation of the Eighth Amendment, basic human rights norms, and international law.”

The military form of the weapon, which looks like hulking satellites mounted on top of trucks, is called “Silent Guardians.” The technology is known as the Active Denial System (ADS). A smaller cousin of the heat ray, the assault intervention device, is planned for use in Los Angeles.

The ADS was rejected for military use in Afghanistan after a short test run in June, and was never used, according to the letter.

Although the ADS is referred to as a nonlethal weapon, there are concerns that misuse could kill or severely injure subjects.

The ADS has been tested on hundreds of volunteers. It uses a beam of electromagnetic millimeter waves. Radiation from the device is absorbed in the upper layer of skin, according to a report on the ADS from the German Foundation for Peace Research.

The beam can heat skin to a painful level “within seconds,” says the report. It adds that “with the highest power setting, second- and third-degree burns with complete dermal necrosis will occur after less than two seconds.”

It says that “such burns would occur over considerable parts of the body, up to 50 percent of its surface. Second- and third-degree burns covering more than 20 percent of the body surface are potentially life-threatening—due to toxic tissue-decay products and increased sensitivity to infection—and require intensive care in a specialized unit.”

One of the main concerns is that individuals using the ADS will hit the same subject more than once, which could cause “permanent injury or death,” the report says.

Because of its large size and vulnerability to gunfire, it is unlikely the ADS would be used as a military weapon, although similar devices are being developed for combat use. Its intended purpose is in crowd control.

Concerns that the ADS could be used for torture are played down in the report, as its large size makes it an impractical tool. It adds, however, that “smaller systems for close distances could principally be used to produce intolerable pain.”

It adds, “Attention by the human rights community in particular for the end use of small millimeter-wave systems is certainly required.”