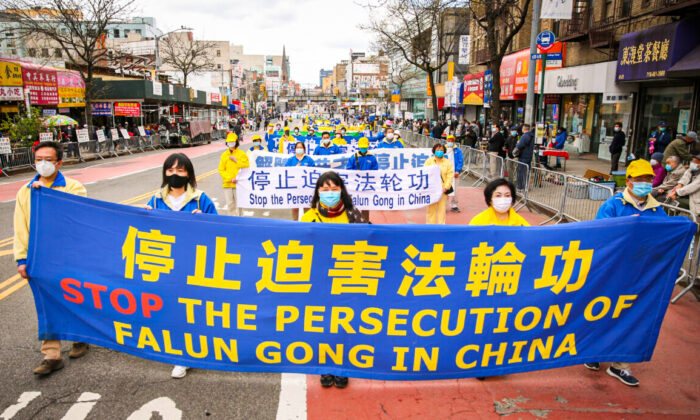 Prisoner of Conscience Recounts Being Subjected to Sexual Torture in China

A prisoner of conscience, recently released from a 7-year term at a notorious prison in the northern Chinese city of Tianjin, has described being subjected to a range of brutal torture methods, including sexual assault.

Zhou Xiangyang, a 49-year-old Falun Gong practitioner and former engineer, was released on March 1 from Tianjin Binhai Prison, according to Minghui.org, a U.S.-based website that documents the Chinese Communist Party’s (CCP) campaign of persecution against the spiritual practice.

While incarcerated, Zhou said he suffered from torture at the hands of inmates and guards, including electrocution, force-feeding, being pepper-sprayed, and assault on his private parts.

Such accounts of torture and inhumane treatment are common among Falun Gong practitioners detained by the CCP for merely refusing to give up their faith.

Falun Gong, also known as Falun Dafa, is a spiritual practice that features three core tenets of truthfulness, compassion, and tolerance, along with five slow-moving exercises. After it was made public in 1992, the discipline’s following in China grew to up to 100 million people by 1999. Deeming the practice’s popularity a threat to its authoritarian rule, the communist regime launched a nationwide persecution campaign to eradicate it.

Since then, millions of practitioners have been detained in prisons, labor camps, and detention centers across the country.

Zhou and his wife Li Shanshan, also a fellow practitioner, were arrested for their persistence in practicing Falun Gong in March 2015, according to Minghui. Chinese authorities sentenced them to 7- and 6-year prison terms respectively.

He served his term at Tianjin Binhai Prison.

To protest his incarceration, Zhou staged a hunger strike for the entirety of his prison term, which resulted in him being subjected to regular forced feeding. As his health worsened, Zhou became wheelchair-bound.

In November 2020, the prisoner of conscience was transferred to another section of the prison, block 10. There, he started to experience a variety of torture methods inflicted by inmates as well as guards.

“On the evening of day one in the 10th block, a guard named Zang Haixu led me to the prison’s hospital for forced feeding, with two inmates, Zhao Shuopeng and Bai Zongming, pushing my wheelchair,” Zhou wrote in his official complaint. “On our way back, the guard made an excuse, shocked me with his electric baton, and pepper-sprayed me in the eye when we were at a location not visible to surveillance cameras.”

In the following months, the guard Zang regularly threatened Zhou with more electric shocks, pepper spray, and beatings, according to the complaint.

A few days after Zhou’s transfer to the new block, another guard Liang Hanwen organized a team of three inmates and tasked them with routinely abusing Zhou, Minghui reported.

One of the inmates, Pan Xin, exacted a series of perverse torture methods.

While the other two inmates held Zhou down, Pan pinched Zhou’s nipples repeatedly until they oozed fluid. He used extreme force to squeeze Zhou’s genitals for long periods until the affected areas festered and became swollen and deformed, according to Minghui.

Additional types of torture and degrading treatment inflicted by Pan included spitting on Zhou’s face, pressing on his chest area with great force, and mixing his liquid food with bottled urine before forcing it down Zhou’s throat.

On four occasions, Pan, in the presence of prison guards Liang or Zang, used his gloved fingers to penetrate the adherent’s anus to torment him, according to Minghui. Further, Zang applied pepper spray on Pan’s glove to amplify the irritation.

The victim said he yelled out for help in such harrowing moments but received no help, although his cries could be heard across the corridor, according to the complaint. On one occasion, he developed severe breathing difficulties that the perpetrators had to interrupt their abuse and carry him to the prison’s internal hospital for oxygen.

According to Minghui, Zhou reported his torture experiences to the chief guard Gao Peizhi seeking help, but was normally met with only more severe abuse inflicted as punishment—sometimes inflicted on the same day of his reporting.

In one incident, the guard Zang shocked him with an electric baton in retaliation. “I heard you tipped our chief guard off,” Zang warned Zhou after the torture session, the complaint read. “I’ve done that [electic shock] to deepen your memory. Don’t speak recklessly later.”

“Shouting [for help] is useless,” the inmates also told the victim, indicating that their acts were sanctioned by the chief guard.

This prison term was not Zhou’s first time being detained. Before this, he had served another 9-year term in the same prison and was detained for one year in labor camps.

Zhou used to be a top railway engineer, working at a state-run railway design firm in Tianjin.

After his release, Zhou moved to live with his parents in northern China’s Hebei Province, though he is still under the CCP’s surveillance, Minghui said.

Over the years, Tianjin Binhai Prison has emerged as a hotspot in the CCP’s ongoing persecution of Falun Gong adherents, based on accounts compiled by Minghui.

In March 2020, Falun Gong adherent Li Shaochen died at 77 during his four-and-half-year term at the prison, Minghui reported. The cause of his death was not identified due to a lack of transparency and deliberate suppression of abuses by Chinese authorities.

In July 2011, new arrival Li Xiwang died at 49 from torture, 10 days after he was admitted. The direct cause of his death was Li being subjected to an extreme form of torture wherein victims are forced to remain in a back-arching posture for a prolonged period. Under this method, victims are forced to sit with their legs perpendicular to each other, with their ankles shackled to the ground. Then both hands are shackled to one of the ankles, meaning the torso is arched over the leg, according to Minghui.org.

A person’s tolerance limit to this type of torture is reportedly two hours. Li was found dead after being forced to remain in that posture for more than 10 hours, Minghui reported. According to witnesses, his facial expression suggested that he died in absolute agony, with his forehead and head covered with pustules and his two eyes bulging.

Another practitioner detained at the prison at the same time as Li, Sander Lau, verified this account of Li’s death in a recent interview with The Epoch Times. Lau said he personally knew of the new arrival.

“Many inside stories came to light because some inmates who were on duty and responsible for surveillance in different teams or in the hospital got well along with us [Falun Gong practitioners],” the survivor said, adding that these informants were sympathizers of detained adherents.

The prison segregated prisoners of conscience who refused to renounce their beliefs, regardless of their age, and subjected them to cruel treatment, according to Lau. They are not allowed to join the general population unless they agree to give up their faith.

Lau himself experienced sleep deprivation, was forced to spend hours sitting or standing in the same position and was subjected to forced feeding during his term there.

Another adherent Ren Dongsheng was also forced to submit to the back-arching torture method six times during his term from 2006 to 2011, according to Minghui.

On the day of his release, prison authorities did not deliver Ren to his family but to local authorities, who transferred him to a seven-day brainwashing session for further persecution. His family found him insane upon his final release. Ren remained mentally ill for years prior to his death at the age of 53 in September 2018.

The Epoch Times reached out to Tianjin Binhai Prison by phone for comment on April 8, but the person who answered refused to respond to the queries, which he claimed “went beyond” the scope of their business.