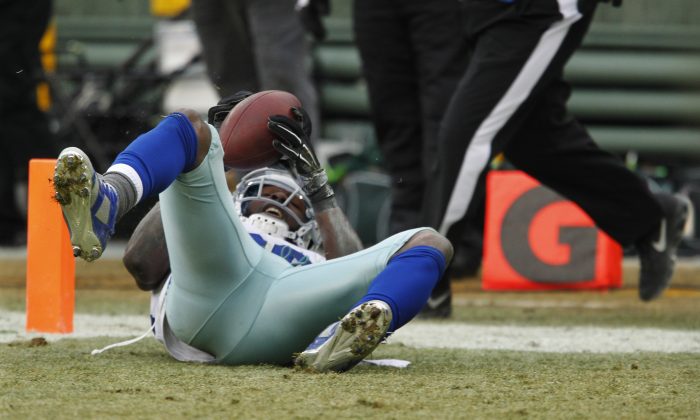 A Colorado prisoner is trying to sue the NFL for $88,987,654,321.88 for the reversed call that overturned Dallas Cowboys receiver Dez Bryant’s catch against the Green Bay Packers during the NFC playoffs.

Terry Hendrix, who is a prisoner a Colorado’s Fremont Correctional Center in Cañon City, submitted a handwritten petition that seeks money for “but not limited to: negligence, breach of fiduciary duty, and also wreckless [sic] disregard.”

The suit also seeks to bring a sense of justice for the Cowboys, the fans, and “all people in or and from the sovereign Republic of Texas,” according to the Dallas Morning News.

In the handwritten note, he said the suit is against NFL Vice President of Officiating Dean Blandino, official Gene Steratore, and NFL Commissioner Roger Goodell.

“Dean Blandino, Gene Steratore, and Roger Goodell are wrong and have stolen a victory from the plaintiffs,” Hendrix wrote. “The Cowboys’ offensive line would have perfectly created an ‘Autobahn’ for DeMarco Murray to drive into the endzone for the score and victory,” reported WFAA.

Hendrix added that the plaintiffs “did suffer a true injury in fact when the respondent(s) did commit a fraud,” and made reference to the “video reversal” of the “outstanding thirty one (31) yard pass reception by Dez Bryant #88.”

During the NFC playoffs, Bryant appeared to catch a ball near the Packers’ end zone in the fourth quarter, which would have set it up for a touchdown to take the lead. However, Packers coach Mike McCarthy threw a challenge flag and the officiating crew found that Bryant didn’t actually maintain possession.

The lawsuit can be read here: