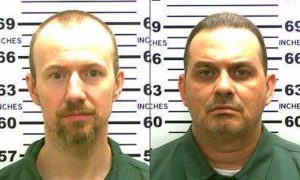 Investigators Believe Prison Employee Was in on Escape Plot
0 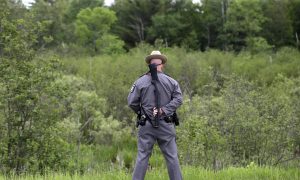 DANNEMORA, N.Y.—A woman charged with helping two convicted murderers escape from a maximum-security prison in far northern New York by providing them with tools made another court appearance Monday as the manhunt for them hit its 10th day.

Prosecutors say Joyce Mitchell, a prison tailoring shop instructor who had befriended the inmates, had agreed to be the getaway driver but backed out because she still loved her husband and felt guilty for participating.

She is charged with helping Richard Matt and David Sweat escape from the Clinton Correctional Facility near the Canadian border on June 6.

Mitchell made her second court appearance in Plattsburgh on Monday wearing a striped prison jumpsuit and a bulletproof vest, and she waived a preliminary hearing. The case against her is now headed to a county court.

“Basically, when it was go-time and it was the actual day of the event, I do think she got cold feet and realized, ‘What am I doing?'” Clinton County District Attorney Andrew Wylie said Sunday. “Reality struck. She realized that, really, the grass wasn’t greener on the other side.”

Wylie said there was no evidence the men had a Plan B once Mitchell backed out, and no vehicles have been reported stolen in the area.

That has led searchers to believe the men are still near the maximum-security prison in Dannemora. At the same time, Gov. Andrew Cuomo cautioned that for all anyone knows, the convicts could be in Mexico, where one of the inmates had fled after killing his boss in the late 1990s.

Mitchell, 51, was charged Friday with supplying hacksaw blades, chisels, a punch, and a screwdriver. Her lawyer entered a not guilty plea on her behalf. She has been suspended without pay from her $57,000-a-year job overseeing inmates who sew clothes and learn to repair sewing machines at the prison.

Sweat, 35, was serving a life sentence without parole for killing a sheriff’s deputy. Matt, 48, was doing 25 years to life for the 1997 kidnap, torture, and hacksaw dismemberment of his former boss.

Brian Barrett, a criminal defense lawyer in Lake Placid not involved in the case, said Mitchell could face liability if Matt and Sweat commit new crimes and she’s found responsible for helping them escape.

Certainly she would be civilly liable./
— Brian

“Certainly she would be civilly liable,” Barrett said.

Additional criminal charges against Mitchell would be up to the district attorney to determine whether it was foreseeable that the convicted murderers would, for example, kill more people, Barrett said. “She could have accomplice liability for that.”

Wylie said Sunday that the killers apparently cut their way out using tools stored by prison contractors, taking care to return them to their toolboxes after each night’s work.

“They had access, from what we understand, to other tools left in the facility by contractors under policy and were able to open the toolboxes and use those tools and then put them back so nobody would notice,” he said.

The convicts used power tools to cut through the back of their adjacent cells, broke through a brick wall, then cut into a steam pipe and slithered through it, finally emerging outside the prison walls through a manhole, authorities said.

Workers on Sunday welded shut a manhole at the base of a wall on the side of the prison where the two men escaped. They also sealed two other manholes on the street near the prison, including the one from which the convicts climbed out.

More than 800 law enforcement officers went door-to-door over the weekend and combed the rural area for signs of the escapees. Residents were on edge, with some saying they were keeping guns handy. But there was also an outpouring of support for the search effort. A restaurant urged people to tie blue ribbons around trees and mailboxes.

“The locals have been awesome,” said Sgt. Barry Cartier of the Franklin County Sheriff’s Department, part of a crew from a neighboring county working 12-hour shifts. “They come around with food all the time. We’ve got too much to eat.”