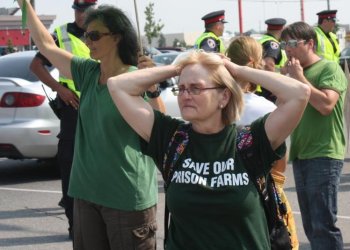 Police line up in the background as protesters gather to prevent the removal of 300 head of cattle from Frontenac Institution in Kingston on Aug. 9. The protesters claim Canada's six prison farms were closed to make way for U.S.-style privatization of t (Gord Campbell)
US

About 18 months ago, Dowling and the group Save Our Prison Farms embarked on a national campaign to keep Canada’s six prison farms from being phased out.

That campaign, which was backed by writer Margaret Atwood, culminated with two days of major protests at Frontenac Institution in Kingston, Ontario, when hundreds of demonstrators showed up to protest the removal of 300 cattle from the century-old prison farm.

A peaceful blockade by protesters prevented cattle trucks from entering the institution on Sunday, Aug. 8. But after 24 arrests and a massive police presence, the cattle were successfully shipped out the following day and sent for auction.

Aside from an abattoir at Pittsburgh Institution in Kingston which will continue operating, Canada’s prison farms are now all but closed. The government said the farms were losing $4 million annually, and plans to replace them with programs it says are more effective.

“Of prisoners who actually work on these prison farms, less than one percent of them actually find work in an agricultural setting.”

Toews said it’s important to ensure prisoners get skills that will help them find a job when they get out of prison.

“That is the focus,” he said, adding that the skills being taught on prison farms are not useful in the broader employment environment.

The government needs to provide job skills that could help prisoners re-integrate into society upon their release in “a wholesome fashion,” he said.

Dowling however, maintains the farms were shut down to make way for U.S.-style privatization of Canada’s prisons as part of the government’s plan to reform the prison system, and says the campaign will now focus on that issue.

“The campaign turns to talking about the Conservative government’s broader prison agenda—the super-prison boondoggle and their efforts to put more people in jail longer and to monitor them by more technology, fewer humans, and so on,” she says.