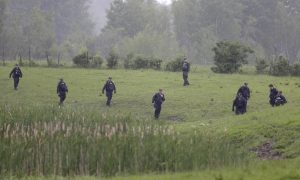 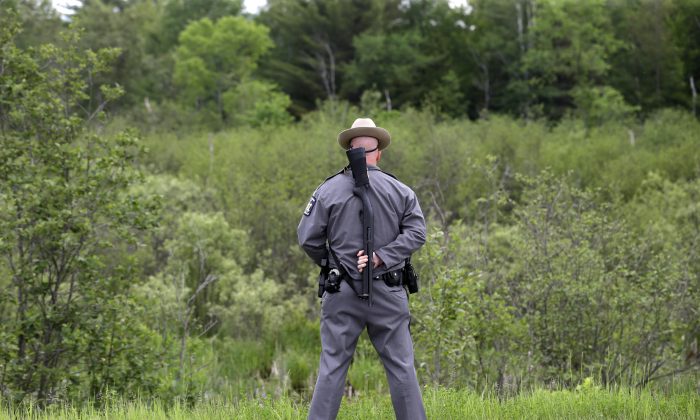 A law enforcement officers stands on a road and looks into the forest near Dannemora, N.Y., Friday, June 12, 2015. (AP Photo/Seth Wenig)
Crime and Incidents

Mitchell is accused of befriending inmates David Sweat and Richard Matt at the Clinton Correctional Facility in Dannemora and giving them contraband.

District Attorney Andrew Wylie said earlier the contraband didn’t include power tools used by the men as they cut holes in their cell walls and a steam pipe to escape through a manhole last weekend.

Law enforcement officers continued to search for the escapees, concentrating Friday in a rural area near the prison.

Mitchell’s family has said she wouldn’t have helped the convicts break out.

An instructor in the tailor shop where the men worked, Mitchell is also suspected of agreeing to be a getaway driver but didn’t show up, leaving the men on foot early Saturday morning.

The hunt for the inmates was focused Friday on an area where residents reported seeing two men jumping a stone wall outside the far northern New York town of Dannemora. About 300 searchers were added, bringing the total number of state, federal and local law enforcement officers involved in the manhunt to more than 800.

Mitchell has a $56,000-a-year job overseeing inmates who sew clothes and learn to repair sewing machines at the prison.

Within the past year, officials looked into whether Mitchell had improper ties to the 34-year-old Sweat, who was serving a life sentence for killing a sheriff’s deputy, Wylie said. He gave no details on the nature of the suspected relationship.

The investigation didn’t turn up anything solid enough to warrant disciplinary charges against her, the district attorney said.

Matt was serving 25 years to life for the 1997 kidnap, torture and hacksaw dismemberment of Matt’s 76-year-old former boss, whose body was found in pieces in a river.