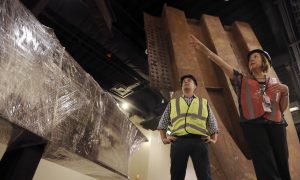 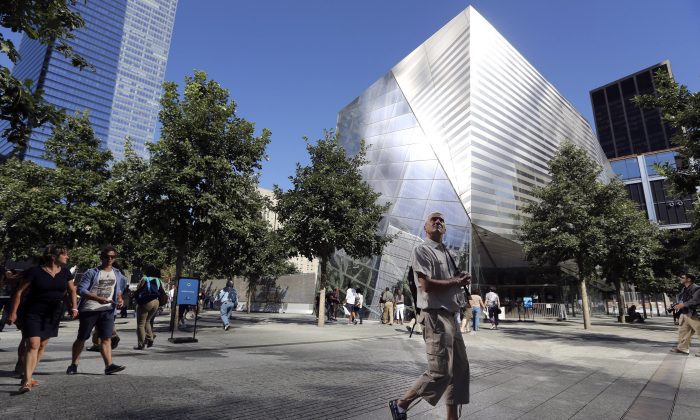 A visitor to the National September 11 Memorial and Museum takes in the sight as he walks past the museum in Lower Manhattan Sept. 6, 2013. (Mary Altaffer/AP)
New York

Priority for Those Close to 9/11 at Upcoming Museum Opening

NEW YORK—The long-awaited museum dedicated to the victims of the 9/11 terrorist attacks is set to finally open on May 21.

The museum is located on the World Trade Center memorial plaza between two reflecting pools.

Planners hoped the museum would open in 2011 for the 10-year anniversary of the 9/11 attacks, but flooding from Superstorm Sandy and a funding dispute with the Port Authority of New York and New Jersey caused delays.

The museum will open for a dedication period on May 15 when access is limited to victims’ families, first responders, survivors, and those who lived in the immediate area during the attacks. During the dedication, the museum will be open around the clock to allow the visitors to attend at a time most convenient to them.

“We are honored that the first people to experience this museum will be the men and women who came to our aid and protected us on 9/11, the families of the innocent victims killed that day, and the survivors who lived to tell the tale of an unimaginable horror so that we may learn from the past.” Michael Bloomberg, chair of the 9/11 Memorial, stated in a press release. “The museum is built upon their incredible stories.”

The museum consists of two major exhibits. First is the Memorial Exhibition which features portraits of the 2,983 victims of the 9/11 attacks and the six people killed in 1991 World Trade Center truck bombing. Visitors can engage each of the portraits to view personal artifacts and photographs contributed by family members.

The second is the Historical Exhibition, which has three parts: the events of the day of 9/11, the rise in terrorism leading up to 9/11, and the nine-month recovery period.

The Foundation Hall is a separate space inside the museum designed to reveal the enormity of the 9/11 tragedy. The exhibit reveals the slurry wall that was built to separate the foundation of the World Trade Center from the Hudson River. The wall withstood the collapse of the towers.

Also inside Foundation Hall is The Last Column, a 36-foot structure covered with missing persons posters, mementos, and memorial inscriptions affixed there by rescue workers. The column was ceremoniously removed from the site on May 30, 2002, nine months after the attacks, to mark the end of the ground zero recovery effort.

Tickets will cost $24, though the memorial will be free on Tuesdays. First responders and victims’ families do not have to pay to visit. Children ages 6 and younger will also be admitted for free.

The planned ticket price has angered some Sept. 11 family members.

Retired Deputy Fire Chief Jim Riches and Sally Regenhard, each of whom lost firefighter sons in the attacks, complained earlier this year that the museum “was never intended to be a revenue-generating tourist attraction with a prohibitive budget and entrance fee.” Museum officials defend the planned ticket price, saying the museum’s operations are privately funded.

Visitors will still be able to visit the World Trade Center memorial plaza free of charge. Since it opened the 2011, more than 12 million people visited the memorial plaza to see the large-scale waterfalls built on the footprints of the lost towers.

“This is a major milestone,” Joe Daniels, president of the National 9/11 Memorial and Museum, said. “It’s just a very real marker of the rebirth of the World Trade Center.”