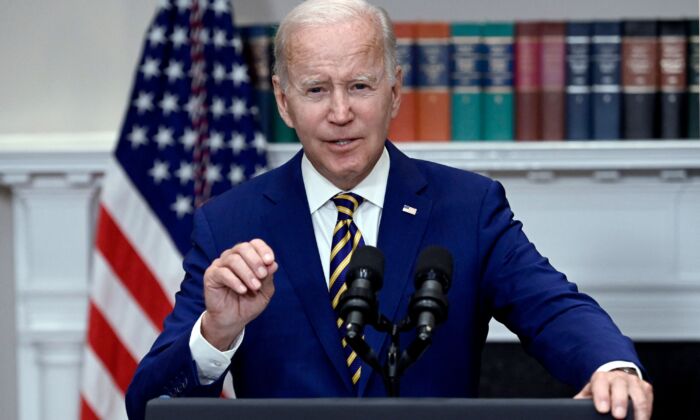 Democrats have been given hundreds of millions of donations from the higher education industry before President Joe Biden canceled up to $10,000 in student loan debt on Wednesday, records show.

Democrats are the largest recipient of political donations from individuals associated with the education industry in the 2020 election cycle as well as the current midterm election, according to OpenSecrets, a nonprofit that tracks money in politics and campaign finance records.

The education industry set new donation records in the 2020 election cycle, pouring almost $341 million into the campaign coffers, with nearly 90 percent of that amount going to Democrats, according to data from OpenSecretes.

Topping the list is Joe Biden, who amassed more than $64.5 million from those associated with institutions, universities, and schools.

Sen. Bernie Sanders (I-Vt.) and Sen. Elizabeth Warren (D-Mass.) followed Biden, bringing over $17.1 million and $11.6 million each respectively from that industry. Both lawmakers have lead efforts to have the president use his existing authority to cancel student debt.

On Aug. 24, Biden announced he will forgive up to $10,000 in federal student loan debt for individual borrowers earning less than $125,000 per year, or $20,000 for Pell Grant recipients meeting the same income standards.

Democratic supporters hailed the unprecedented debt relief action, with Warren describing it as one of the biggest acts of consumer debt relief in American history.

Other progressive lawmakers, such as Sanders, welcomed Biden’s largest debt cancellation per individual so far but said it doesn’t go far enough.

Republicans, meanwhile, criticized the action as being “unfair” for shifting the burden to tax-payers who didn’t go to college or those who made sacrifices to pay off their student loans.

Rep. Virginia Foxx (R-N.Y.) even argued the wide-scale student loan forgiveness was the Democrats’ latest attempt to win votes in the upcoming midterms.

Campaign contributions show democrats have been favored by those within the education industry over the years.

“Democrats haven’t received under 70 percent of education industry donations in a cycle since 2002,” said OpenSecrets.

In the 2018 election cycle, Democrats received more than $64.5 million from the industry, while Republicans got $7.8 million, the group’s data shows. The top 20 recipients of the education industry donations are all Democrats.

In 2020, Democrats accounted for 19 of the 20 recipients of funding. The only exception is former President Donald Trump, who was given $8.4 million from educators.

The trend continues in the current campaign for November’s midterm election, with Democrats already dominating all top 20 recipients.

Sen. Raphael Warnock (D-Ga.), the largest recipient of money from the education industry, has hauled in contributions of more than $2.2 million. Sens. Mark Kelly (D-Ariz.) comes in second with over $1 million. Rep. Val Demings (D-Fla.), the third-largest recipient, has reported accepting $600,000.

In this campaign cycle, top donors include employees of the University of California, who contribute roughly $4.4 million, Stanford University ($1.8 million), and the State University of New York ($956,000).