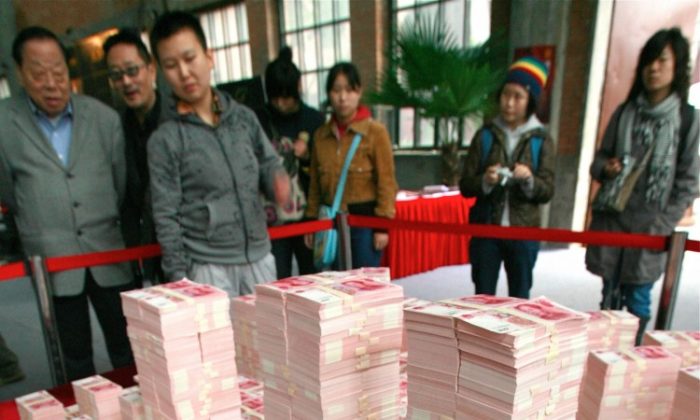 A model of Beijing's Central Business District made from Chinese yuan notes, in 2007. Economists say that rampant money printing is causing inflation in China. (Teh Eng Koon/AFP/Getty Images)
China

Printing Money Is Cause of Inflation in China

China’s broad money supply more than doubled in four years, reaching 97.42 trillion yuan (US$15.66 trillion) by the end of 2012, according to central bank figures. Economists blame the unprecedented growth in credit for the inflation and asset bubbles.

Mainland economist Ni Jinjie stated that China’s excessive printing of currency by the central bank is the origin of the current inflation crisis. It is the abundant credit supply, however, that leads to asset bubbles, as can be witnessed in the real estate sector.

One ratio to measure credit is called M2, which includes all types of cash, as well as deposits for checking and saving accounts. Since credit is the lifeblood of the economy, its relationship to gross domestic product (GDP) is commonly used to measure the degree of monetization in a country’s economy. The economy needs credit to run and grow, but too much of it can fuel bubbles and cause inflation.

In developed economies, the ratio between M2 and GDP is below one. In emerging market countries, M2 is usually 1 to 1.5 times GDP.

China’s ratio of M2, 97.42 trillion yuan, to GDP, 51.93 trillion yuan ($8.35 trillion), reached its all-time high of around 1.88 in 2012. China’s M2 grew 13.8 percent over the year, much higher than GDP and 1.5 times the rate of M2 growth in the United States. With respect to credit creation, nobody beats China, leaving the country vulnerable to bursting bubbles.

In his article published in the Beijing News, finance and economics writer Ni Jinjie, writes, “In the past two decades when the trends of China’s marketization and monetization have been the most evident, the M2 to GDP ratio climbed from 82.5 percent in 1990 to 150 percent in 2000. At of the end of 2012, the ratio approached nearly 190 percent.”

Ni points out: “GDP can’t grow without the backup of the accumulated stock of currency over the long term. [The] M2 stock level has a direct impact on a nation’s macroeconomics—the rate of inflation, economic growth, and unemployment, along with the balance of international payments and other economic indicators … A greater M2 to GDP ratio means inflation risks and an overheated economy.”

“With a growing M2 to GDP ratio, a huge amount of newly [created] money is the most direct cause of the persistently high prices of commodities and housing in the country today,” Ni adds.

Since M2 is mostly made up of assets in the banking system, it is unbridled credit creation that fuels the bubble.

“Years ago, 3 to 5 trillion yuan ($482 to $804 billion) would be regarded as excessive credit supply. At that time it’s hard to image the rapid expansion of today’s bank credit,” Ni said.

These new loans flow into assets such as housing. In addition, a knock-on effect is created, pushing up the prices of raw materials and creating inflation. In the case of housing, demand for wood, cement, and steel pushes up prices for these commodities. Wages for workers in the construction sector are used to buy basic necessities, thereby increasing price pressure for these goods as well.

Apart from loan creation, money printing by the central bank also adds to the money stock. According to the 21st Century Network, China’s total money creation in 2012 of 12.26 trillion yuan ($1.97 trillion) accounted for nearly half of the global new money supply at 26.25 trillion yuan ($4.22 trillion).

As a result of continued new loan creation, Chinese corporations are heavily indebted. Calculations by Zerohedge show that China has the most heavily indebted corporate sector, with a debt-load of 151 percent of GDP.

Goldman Sachs thinks that this trend is not sustainable: “It is therefore critical for the new leadership to pursue reforms that not only support the private sector, but also consumption more broadly, in order to utilize this capacity; the alternative would likely prove negative for sectors, banks, and ultimately, the economy,” the bank writes in a note to clients.