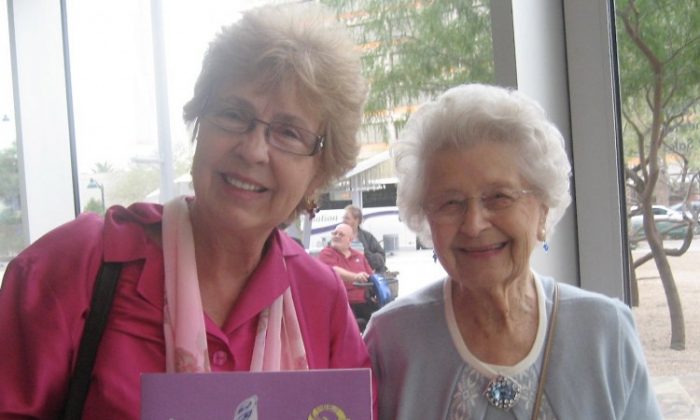 Bonnie Wolfgang, who is the principal bassoonist with the Phoenix Symphony, attends Shen Yun with her 91-year-old mother. (Jana Li/The Epoch Times)
News

MESA, Ariz.—Shen Yun Performing Arts was warmly received during its fifth and final performance of the Mesa portion of its 2013 tour at the Ikeda Theater in the Mesa Arts Center March 3.

Bonnie Wolfgang, who is the principal bassoonist with the Phoenix Symphony, attended the performance with her 91-year-old mother.

Both said they enjoyed the performance.

“It was absolutely beautiful; just delightful,” Ms. Wolfgang said, adding that the Shen Yun Performing Arts Orchestra was wonderful. “I enjoyed the Chinese instruments—the blend of Eastern and Western instruments—it was lovely. Just the most beautiful, graceful dancing and elegant, gorgeous costumes. We really enjoyed it.”

The orchestra is one-of-a-kind. According to Shen Yun’s website, “A Western philharmonic orchestra plays the foundation, while traditional Chinese instruments lead the melodies. The sound produced is uniquely pleasing to the ear. The ensemble at once expresses both the grandeur of a Western orchestra and the distinct sensibilities of China’s 5,000-year-old civilization.”

Ms. Wolfgang agreed that the music inspired her. “Yes, absolutely. I liked the blend of the Eastern music and the sound of the different instruments. Absolutely lovely.”

Another major feature of New York-based Shen Yun is its state-of-the-art, digital backdrop, which provides the audience with vivid imagery of China’s landscapes, from the vast plains of Mongolia, to fertile farmlands, to the lofty peaks of the Himalayas.

In addition, the dancers seamlessly move from the backdrop as dynamic animations to the stage and vise-versa. Heavenly fairies and mythical characters descend from the sky and suddenly appear on stage, adding a magical feel to the stories.

Ms. Wolfgang was pleased with this technology.

“The scenery was absolutely stunning. I liked the way they blended the dancers on stage and they went up and became part of the screen. It was very lovely. It was done very well; I really enjoyed it,” she said.

She particularly enjoyed the piece Phoenix Fairies and The Emperor Journeys to the Moon, but she admitted, “They were all beautiful … very elegant and graceful all the way through it.”

Her mother noted the beauty in the dance An Early Spring in which dancers twirl handkerchiefs in a lively folk dance. “I enjoyed it very much. Yes, very much! I thought that was so pretty.”

Ms. Wolfgang said she would recommend the performance to her friends.