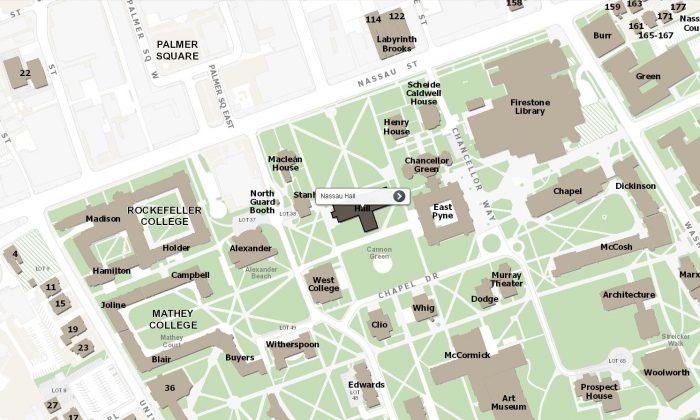 Reports of gunshots in Nassau Hall at Princeton University on Tuesday night prompted a police response, but an "all clear" was given after an investigation. (Princeton)
US

Princeton: ‘All Clear’ Given After Reports of Gunshots at Nassau Hall

Princeton said on Tuesday night that there reports of gunshots at Nassau Hall prompted a police response, but later gave an “all clear” after police found nothing.

Police didn’t find anything, including anyone injured, said the university at 10:29 p.m., about an hour and a half after the search started.

Princeton police “believe reports of gunshots were unfounded,” according to the university.

“Someone reported hearing what was believed to be gunshots inside,” said the university at 10:05 p.m.

Students and others at a talk by Ezra Klein of the Washington Post in Whig Hall were allowed to leave after about an hour in the building’s basement. They were told to consider everything south of Whig Hall to be “all clear.”

Public safety was blocking off Elm Street starting at the Dillon Gym parking lot and is diverting everyone away from Nassau Hall. On Nassau Street, local Seth Callan said via Twitter that pedestrians were walking past the campus as normal, although the main gates were closed and guarded.

Princeton University is located in Princeton in New Jersey.

[View the story “Princeton: Reports of Gunshots at Nassau Hall” on Storify]