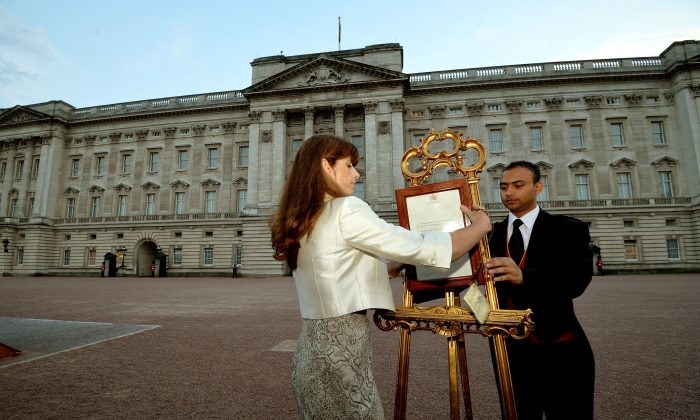 The Queen's Press Secretary Ailsa Anderson with Badar Azim, a footman, places an official document to announce the birth of a baby boy, at 4.24pm to the William and Kate, the Duke and Duchess of Cambridge at St Mary's Hospital, in the forecourt of Buckingham Palace in London Monday July 22, 2013. The child is now third in line to the British throne. (AP Photo/John Stillwell, Pool)
UK

Princess Kate Middleton has given birth to a baby boy, according to officials.

“I’m delighted for the Duke and Duchess now their son has been born. The whole country will celebrate,” said U.K. Prime Minister David Cameron, in a statement on Twitter.

The child is now third in line for the British throne after Prince Charles and William.

“Both my wife and I are overjoyed at the arrival of my first grandchild.  It is an incredibly special moment for William and Catherine and we are so thrilled for them on the birth of their baby boy,” his statement reads. He added, “Grandparenthood is a unique moment in anyone’s life, as countless kind people have told me in recent months, so I am enormously proud and happy to be a grandfather for the first time and we are eagerly looking forward to seeing the baby in the near future.”

The Duke of Cambridge, Prince William, was present for the birth, reported The Associated Press.

Kate was checked into St. Mary’s Hospital in London on Monday morning.

The baby is the couple’s first child.

The child will also become Supreme Governor of the Church of England.