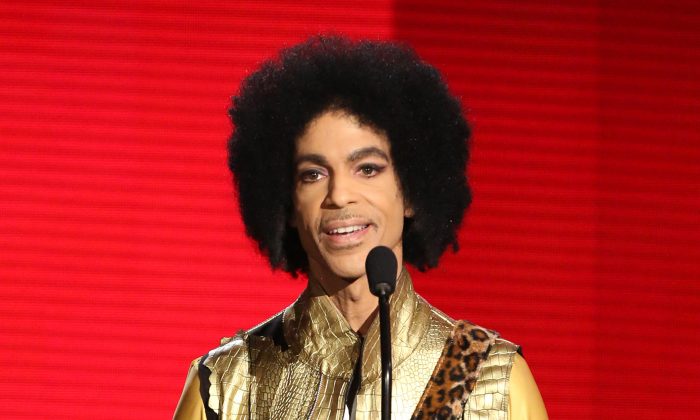 FILE - In this Nov. 22, 2015 file photo, Prince presents the award for favorite album - soul/R&B at the American Music Awards in Los Angeles. A famous bassist and longtime friend of pop megastar Prince says the artist found “real happiness” in his faith and could stay up all night talking about the Bible. Larry Graham tells The Associated Press that Prince became a Jehovah’s Witness later in life and that it changed the star’s music and lifestyle. (Photo by Matt Sayles/Invision/AP, File)
Entertainment

Prince’s Staff ‘Screamed’ and Were ‘Too Shocked to Call 911’ When His Body Was Found, Report Says

The man who called 911 to report Prince’s unresponsive body has detailed his experience.

Andrew Kornfeld, the son of an addiction specialist, was identified as the caller. He reportedly found the singer’s body at his home in Minnesota.

Kornfeld was at Prince’s home with a bag full of the synthetic opiate buprenorphine. His father, addiction specialist Dr. Howard Kornfeld, was unable to meet Prince at his house.

Speaking through his attorney, William Mauzy, Andrew Kornfeld said he took a late flight on April 20 so he could be at Prince’s Paisley Park studio complex the next day. When he arrived there, he was one of three people to find Prince in an elevator, unresponsive, according to MailOnline.

Andrew was the person who ultimately called 911.

Mauzy said Andrew was not going to give Prince buprenorphine, but he was going to instead give it to a Minnesota doctor who was scheduled to see him.

He said the younger Kornfeld is a pre-med student and said convincing people to seek treatment is something “he has done for years.”

Mauzy said Dr. Kornfeld, the elder, wanted to get Prince “stabilized in Minnesota and convince him to come to Recovery Without Walls in Mill Valley. That was the plan.”

According to Mauzy, Andrew Kornfeld told him that two staffers “screamed” when they saw Prince’s body and “were in too much shock” to call 911, the Mirror reported.

An unidentified male—believed to be Andrew—told the 911 dispatcher “we’re at Prince’s house,” when he was asked about the address.

“The plan was to quickly evaluate his health and devise a treatment plan. The doctor was planning on a lifesaving mission,” Mauzy said.

They will provide “federal resources and expertise about prescription drug diversion,” CNN reported, citing a statement issued by officials in Minneapolis.