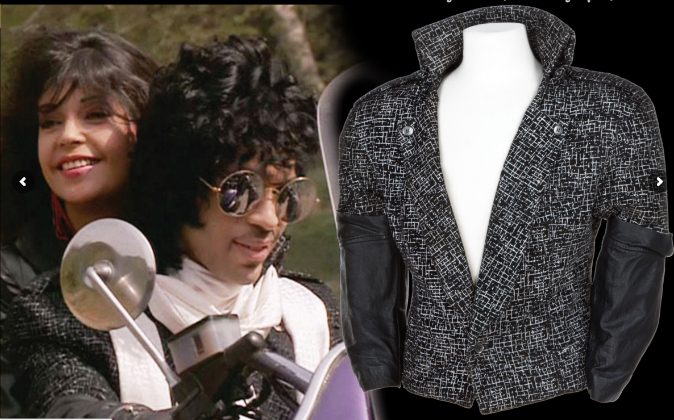 Prince’s Jacket From ‘Purple Rain’ to Be Auctioned

Prince’s jacket from the film, “Purple Rain” is hitting the auction block, according to Hollywood Reporter.

Prince wore the black and white coat with leather sleeves as he rode a motorcycle with actress Apollonia Kotero in the 1984 film.

“It’s definitely the most important piece of screen-worn Prince clothing that’s ever come up for auction,” said Joe Maddalena, president of the auction house. “This is the first time ever for something like this, and it might be the only time because the rest of the costumes may be in his (personal) wardrobe.”

The private musician was found unresponsive in his Paisley Park Estate on April 21, in Minneapolis and was later pronounced dead. He was 57.

Since his death, fans have aligned his sprawling home—which will potentially become a museum—with flowers, balloon, and photos. Celebrities have paid tribute to the singer via their social media accounts and platforms. As of April 27, Beyonce at her Formation World Tour opener in Miami held a moment for silent and lit the stage purple in his honor.

“Prince memorabilia in general, it just really doesn’t exist. It seems like he controlled it all,” Maddalena said, according to Hollywood Reporter. “This is the first time ever for something like this, and it might be the only time because the rest of the costumes may be in his (personal) wardrobe.”

The coat was given to a makeup artist who worked with Prince throughout the movie and was gifted the rare memento.

The auction is set to begin June 29 and will include additional memorabilia from musicians Britney Spears, Alicia Keys, as well as a Swarovski crystal studded glove from the 1992 Dangerous World Tour starring Michael Jackson. Despite the star-studded auction, Prince’s coat is expected to “be the star of the show” and estimates suggest it could sell for anything from $6,000 to $8,000.

Maddalena is hoping bids will be “equivalent to his stature as a musician.”