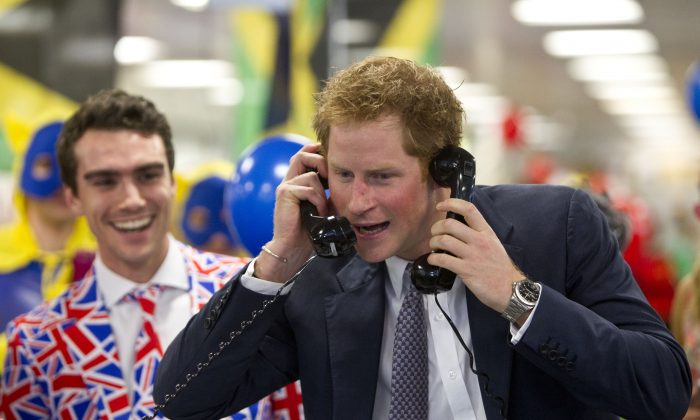 Prince Harry Parties Hard This Week, Pictured Stumbling Out of Nighclub After 3 a.m.

Prince Harry has been partying hard this week, having spent time dancing at two nightclubs and possibly more, and stumbling out of one of them after 3 a.m.

Harry stayed out late a week prior in Abu Dhabi, celebrating with Lewis Hamilton and others after the Formula 1 driver won the championship.

Harry was at the club until about 5 a.m., according to locals. At another point during his trip, he was pictured smoking hookah on a yacht.

This week he’s been at it again, spending the night on Tuesday with a group of friends at London’s 5 Hertford Street before dancing at the club’s private disco, Lou Lou’s.

“He wasn’t exactly twerking, but he was definitely giving it some,” one source told The Royalist. “He was surrounded by quite a lot of rugger-bugger types. They were all getting cocktails in.”

And Thursday night Harry was at it again after an emotional remembrance of childhood friend Henry van Straubenzee, and was caught on camera leaving the Raffles nightclub in Chelsea.

Harry went to the club hours after the service, arriving at about 2 a.m. and leaving about an hour later.

An onlooker told the Daily Mail that the prince seemed to be in good spirits when he exited the club.

“When he came out he looked happy and people helped him to his waiting car. The person who is helping him was from the club while the detectives were helping as well. The prince is smiling and he looked very happy and as he had a very good time out with friends,” the witness said.

Several pictures appear to show Harry stumbling a bit as he heads toward a waiting car, and one of the security guards helping support him.

Harry recently said in a magazine interview that he’s changed a lot since he was infamously caught on camera in Las Vegas during a strip poker game, but his advisers worry that he hasn’t changed enough and want to restrain him by sending him to train to fly helicopters again.

Harry has been a desk-bound officer in London since February, but sources close to the Royal household said that this has left him with “too much time for partying.”

Harry served in Afghanistan as an Apache pilot and will now be undergoing training to fly the Lynx battlefield-support chopper, one of the fastest helicopters in the world, a source told the Mail.

“Given Harry’s time off from flying, he will probably need six months to fully convert to his new role,” the military source said. The training is necessary because the Lynx is being used in combat while the Apaches currently are not.