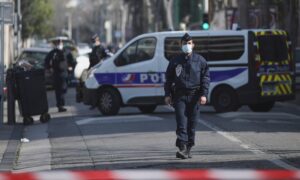 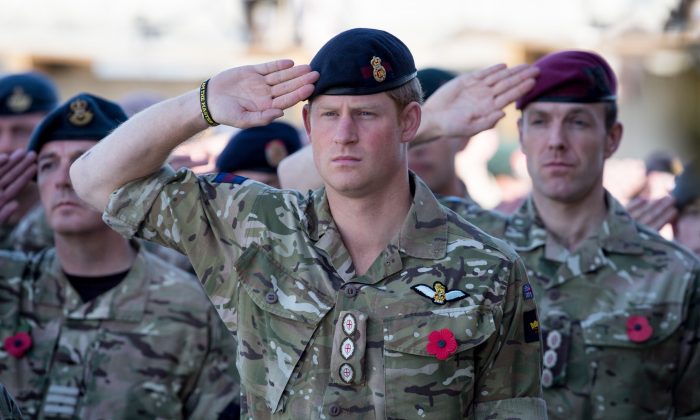 Prince Harry salutes as the Last Post is played as he joins British troops and service personal remaining in Afghanistan and also International Security Assistance Force (ISAF) personnel and civilians as they gather for a Remembrance Sunday service at Kandahar Airfield November 9, 2014 in Kandahar, Afghanistan. (Matt Cardy/Getty Images)
Europe

Prince Harry is going to become the first royal general, friends say, as he’s being lined up for the future commander of the Household Cavalry.

Harry, who is a serving captain in the Blues and Royals, recently passed all the necessary exams to be promoted to major.

He could become Lieutenant Colonel by 2023.

Captain Harry Wales, as he’s known in the military, told friends that “every serving officer wants to command their own regiment and I am no different,”reported the Daily Star.

Harry has also trained as an Apache gunner and pilot, and undertook two operational tours of Afghanistan, one in 2008 and one in 2012.

“I am absolutely delighted Harry has set his sights high. Every officer at Harry’s stage in his career should be thinking of his future and should be ambitious enough to want to command his regiment,” an anonymous senior officer said about Harry’s ambitions.

“There’s nothing wrong with that. He is a very capable officer and has proved his worth in battle.”

If Harry did become the commander of the Household Cavalry, he would be the first royal general in history.

The cavalry regiment operates armored fighting vehicles. It’s also possible that Harry would become a commander for the Household Cavalry Mounted Regiment, which operates horses for mostly ceremonial duties such as for Queen Elizabeth’s birthday parade in June each year.

“Harry was often regarded as a bit of a joker but he proved he is a serious individual when he passed Apache pilot selection,” a friend added.

Harry’s Army career has been the subject of many rumors. One late last year said that Harry wants to return to active service.