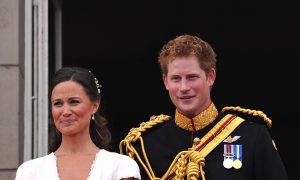 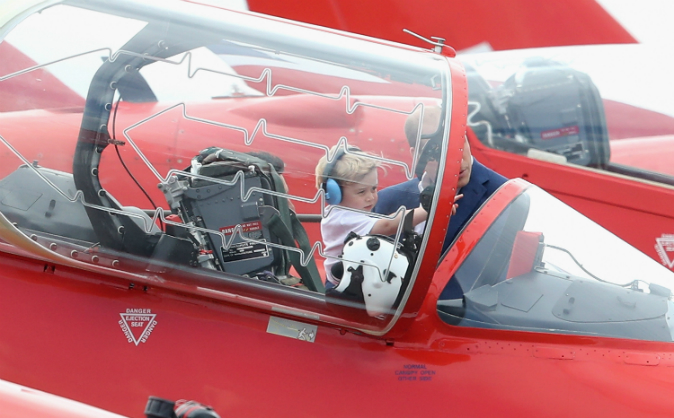 Prince William, Duke of Cambridge with Prince George in the cockpit of a Red Arrow during a visit to the Royal International Air Tattoo at RAF Fairford on July 8, 2016 in Fairford, England. (Chris Jackson/Getty Images)
Royals

Prince George is on cloud nine.

The first born of Prince William and the Duchess of Cambridge, Kate Middleton, attended the Royal International Air Tattoo at the RAF Fairford in Gloucestershire on July 8. This is the first royal engagement for the toddler.

Clad in a white polo shirt and blue shorts, little George took in the sights of aircrafts alongside his parents. George was also granted the opportunity to sit inside the cockpit of one of the RAF Aerobatic Team’s Red Arrow Hawks.

“Mummy, can I fly the Red Arrow now?” he asked Kate, according to reports by Hello Magazine. William reportedly told the 2-year-old, “Not right now.”

George also witnessed a piece of history when he encountered a Squirrel helicopter. The helicopter is the exact aircraft William trained in while based at RAF Shawbury in 2009.

As parting gifts the toddler was handed a pair of blue ear defenders and a blue piggy bank.

Since becoming a father—to George and daughter Charlotte—Prince William has made it his mission to protect his children as well as others from bullying. In a newly-released public service announcement for Stand Up to Bullying Day on July 5, the prince called for action against bullying that can ultimately “affect any one of us.”

“Bullying is an issue which can affect any one of us, regardless of age, background, gender, sexuality, race, disability, or religion,” William said.

“It is our collective responsibility to be alert, and to be ready to challenge the behavior we see around us,” he said. “We all have a role to play to ensure that we do not stand by, but instead stand up, and put a stop to bullying.”