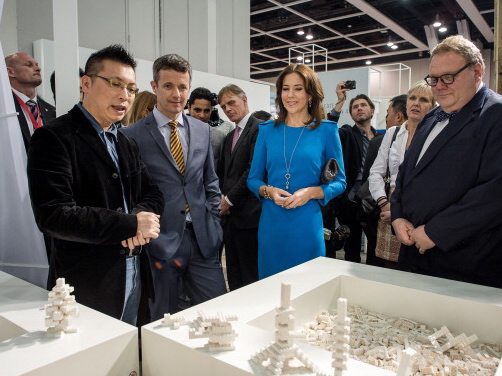 Princess Mary gave a speech during this official visit explaining Danish creativity. “Although Danish design rests on the foundation of traditional craftsmanship, increasingly, Danes are exploring designs as a means to address today’s societal challenges, for example, in the fields of energy, environment, climate and urbanisation,” reported NTD Television.

BoDW has taken place in December annually since 2002 and partners with a different country every year. The one week-long event comprises an award presentation gala dinner, design conference, workshops, forums and exhibitions to showcase and inspire innovation, design and fashion.

This year is Hong Kong Design Year 2012 and the organiser of BoDW, Hong Kong Design Centre, invited Denmark to be the partnership country to celebrate its 10th anniversary. Also scheduled is the world’s longest fashion runway with more than 300 models to showcase fashion designs from Denmark and Hong Kong on Sunday Dec 9 at the Tsim Sha Tsui promenade.

Princess Mary, 40, is originally from Tasmania, Australia. She has now became a Danish citizen and a member of the royal family since marrying Danish Prince Frederik, 44, in 2004. They now have four children and reside in the palace in Copenhagen.

The Danish Royal couple had a chance for sightseeing along Victoria Harbour on Friday Dec 7 before heading off to Beijing to complete the last leg of their formal Royal visit to China.