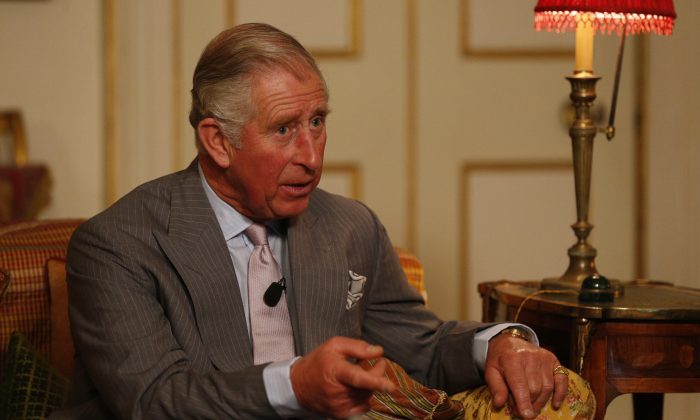 Prince Charles, Prince of Wales takes part in his first ever Google+ Hangout as part of the #iwill campaign at Clarence House on Nov. 20, 2014, in London, England. (Jonathan Brady/Getty Images)
Europe

Prince Charles Will Focus on ‘Serious Issues’ When He Becomes King, Friend Says

Prince Charles is already planning his strategy for when he becomes king, according to a new report.

Charles is in line to take over the throne when Queen Elizabeth, 88, passes away or abdicates.

Charles, 66, is a dividing figure among elected officials and the public because he often speaks his mind and has become involved in a range of issues that he feels strongly about.

That involvement will continue when he becomes king, sources close to the heir say.

“He will be true to his beliefs and contributions,” a well-placed source who has known him for many years told the Guardian.

“Rather than a complete reinvention to become a monarch in the mold of his mother, the strategy will be to try and continue with his heartfelt interventions, albeit checking each for tone and content to ensure it does not damage the monarchy. Speeches will have to pass the following test: would it seem odd because the Queen wouldn’t have said it or would it seem dangerous?”

Charles has stirred controversy in the past by lobbying officials over a range of issues, including genetic modification of crops and other health and food issues.

And his comments to the public almost always spark debate, such as his recent comments that most people in the United Kingdom don’t really know much about farming.

While the prince plans on staying true to himself, he will be mindful of the impact his positions and words can impact his role as king.

“The prince understands the need to be careful about how he expresses concerns or asks questions, but I do think he will keep doing exactly that,” said Patrick Holden, an organic farmer, friend of the prince and adviser to him on sustainability.

“He is part of an evolving monarchy that is changing all the time. He feels these issues are too serious to ignore.” The prince’s Google+ hangout this week, in which he answered a range of questions from the public, is just one indication of how he’ll approach the throne differently.

A number of courtiers noted that his 40 years as heir and his travels and involvement in the issues he speaks out about mean is he able to speak out about them.

The BBC notes that the prince told the network in 2008 that his function would be to bring people together to focus on issues, to exploit what he calls his “convening” power.

When asked whether as king he would continue to champion themes, the Queen’s eldest son replied: “I don’t know. Probably not in the same way.”

Charles told Vanity Fair in 2010 that he sees the role as king in “a different way” from his predecessors, because times have changed and the role has along with it. He also defended his actions.

“I am absolutely determined to be the defender of nature. Full stop. That’s what the rest of my life is going to be concerned with,” he said.

“I think people don’t quite understand how much it requires to put your head above the parapet,” he said. “It’s no fun having your head shot off all the time. But I just feel deeply … I know perfectly well this book is going to bring all of my critics out of their lairs. It’s probably just as well.”

“I think it’s actually crucial to confront all of these issues before we really do compromise the future of our successors,” he added.

Friends such as Holden have in the past tried to reassure that Charles “has always been good at boundaries” and will be able to change to fit the throne, opponents aren’t reassured.

“Charles is a very good advert for why the monarchy is a bad idea. The monarch has power, access and influence, and is completely beyond the reach of democratic accountability,” Republic spokesman Graham Smith said.

“The reign of Charles III–if he chooses to keep his own name–will be different to the reign of Elizabeth II,” concluded BBC’s Peter Hunt. “Just how different is what troubles his critics.”