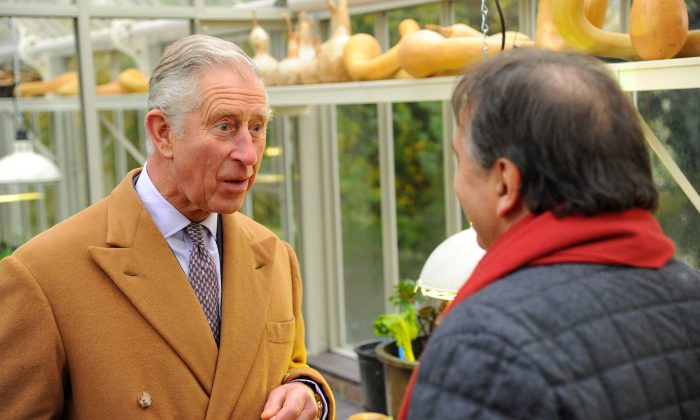 Prince Charles, Prince of Wales at The National Heritage Garden, where he was given a tour by Raymond Blanc at Belmond Le Manoir aux Quat'Saisons on November 21, 2014 in Great Milton, England. (Photo by Eamonn M. McCormack/Getty Images)
Europe

Prince Charles has been photographed with a gun for the first time in years, though he tried to stop the pictures from being published.

Charles was photographed in a shooting party he hosted on Queen Elizabeth’s 24,000-acre Sandringham estate in Norfolk.

It’s the first time that Charles, 66, has been pictured with  a gun since December 2008.

Charles, who was with about eight friends, sent police to the photographer, and then “got his officials to contact newspapers in an effort to stop details of the shooting party being published,” according to the Express.

“Charles looked every inch the country gentleman in his shooting jacket, flat cap and carrying his shepherd’s crook stick,” an eyewitness said.

He did not appear to have a gun on one of the first drives of the day and seemed to be happy, playing host to his friends who were shooting. But on a later drive, he had a gun in his hands, suggesting that he was joining in the shooting of pheasants.”

People are noting that the prince’s hunting seems to clash with his support of green and animal welfare causes.

“Huntsmen argue that without shooting, many wild woodland and bog habitats would not be preserved, but ‘antis’ point out that many commercial, big game hunting safaris in Africa make the very same arguments,” reported the Daily Beast.

“As well as animal cruelty issues, there is also the environmental damage caused by the lead shot propelled from shotgun cartridges (some estimates say that across Europe, 8.7% of ducks and geese die as a result of lead poisoning every year) to consider.”

It later concluded that Charles should stop hunting.

“Access to the best shooting in the world is one of the perks of being a royal. Unfortunately for Prince Charles, if he wants to be a King who will be taken seriously as an ambassador for global conservation, he is going to have to forgo this pleasure.”