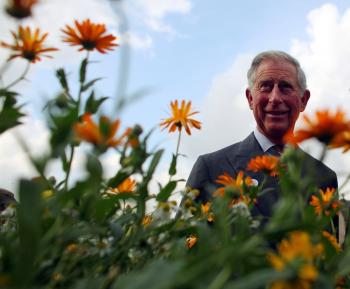 Prince Charles visits a herb garden at Incredible Edible Todmorden, viewing public spaces used to grow fruit and vegetables during his five day UK tour to promote sustainable living. He travelled on the Royal Train, powered by biofuel, touring cities and towns from Glasgow to London. (Christopher Furlong/Getty Images)
US

John Maynard
View profile
Follow
biggersmaller
Print
The Prince of Wales may have been derided by the establishment in the past for being 'out there' or just plain 'loony.' But as the world catches up with him on environmental and sustainability issues, the Prince is fighting back.

Prince Charles, who happily admits to talking to trees and plants, has confessed that he is aware of accusations he is 'potty' following an interview with gardening celebrity Alan Titchmarsh to be screened on BBC this week, reported UK tabloid News of the World.

His Royal Highness says he overhears the comments from the some 30,000 visitors that visit his 900-acre Highgrove home every year and finds it bewildering what they say.

"I got a lot of flack for a lot of things. I mean, bewildered, frankly, as though you were doing something positively evil," he said. "I mean potty this, and potty that, loony this and loony that."

Prince Charles, who is an avid gardener and supporter of the organic industry, said gardening keeps him sane.

"I happily talk to the plants and the trees, and listen to them. I think it's absolutely crucial," he explains.

The News of the World reports him telling Alan Titchmarsh that one of his favourite pastimes is to walk around the garden, trimming and pruning his trees into shape.

"It's terrific therapy. Whenever I go on a walk now I'm always sawing off," he said.

He also confesses that he is passionate about his garden.

"Everything I've done here, it's almost like your children. Every tree has a meaning for me," said Prince Charles. "Terrible thing really, mustn't get too attached. I shall have to try and detach myself soon, psychologically."

Prince Charles has always been an avid naturalist, openly promoting conservation and organic farming efforts. While he received a lot of derision during the 1980s, his views on gardening and organic farming are becoming more acceptable and are hardly extreme nowadays.

Speaking about sustainability at a conference for IBM in London on September 10, he described how his great-great-great-grandfather Prince Albert had opened the 1851 Great Exhibition at the height of the Industrial Revolution, "to show people then what was going on and what opportunities there were" for environmental sustainability.

There were six million people at the exhibition, he noted, and many returned a number of times. He added how he wished there could be the same interest nowadays concerning sustainability and the planet that there was back then.

"[We] could … help people to understand what possibilities there were, and what opportunities there were in this effort to live in a more sustainable way, of creating a low carbon economy, of creating ever greater energy efficiency … and reconnecting ourselves with nature once again, instead of kicking her to one side and suppressing her," he said.