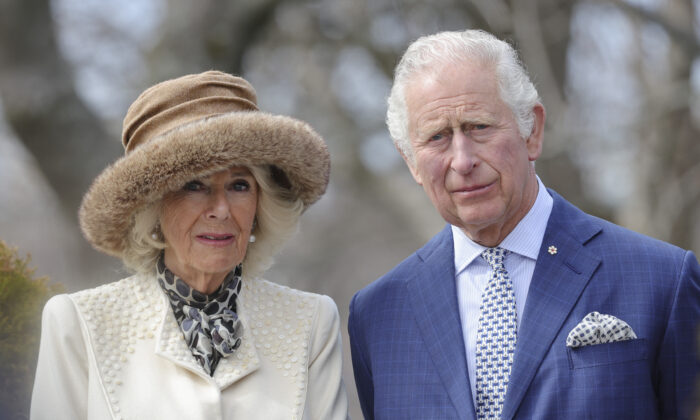 Prince Charles, Prince of Wales, and Camilla, Duchess of Cornwall, observe a moment of silence to honour and remember the indigenous children who attended residential schools in Labrador and Northern Newfoundland as part of a solemn ceremony in the Heart Garden during day one of the Platinum Jubilee Royal Tour of Canada in Saint John's, Canada, on May 17, 2022. (Chris Jackson/Getty Images)
Canada

Prince Charles and Camilla, the Duchess of Cornwall, have officially arrived in St. John’s, Newfoundland and Labrador, to kick off their Canadian tour that will span three days and bring the royals to Ottawa and the Northwest Territories.

Taking a Canadian government jet, they arrived at St. John’s International Airport on Tuesday, then took a motorcade to be received at the provincial legislature by Prime Minister Justin Trudeau and Governor General Mary Simon.

According to the official itinerary of the visit on the government website, they plan to visit Quidi Vidi Village, a fishing village in St. John’s, Tuesday afternoon. On Wednesday morning, they plan to attend the National Wreath-laying Ceremony in Ottawa as well as visit with members of the Ukrainian community at the Assumption of the Blessed Virgin Ukrainian Orthodox Cathedral. They also have meetings planned with the prime minister and the governor general at Rideau Hall.

On Thursday, in Yellowknife, they will visit the Dene First Nation to “take part in various community events and experience local culture and traditions.” They will also participate in a 75th anniversary celebration of the Rangers and also meet with climate change experts to discuss climate change’s impact on the Northwest Territories and indigenous-led initiatives to address it.

Charles and Camilla are taking the trip to represent Queen Elizabeth, currently aged 96, as a result of the Queen’s age and recent concerns over her health, which reportedly prevented her from attending the opening of the UK Parliament for the first time since 1963, according to the Business Reporter. The Queen has visited canada herself 22 times since her first visit in 1951.

“The Queen asked me to express her best wishes in this special year and her express her deep affection for Canada and all Canadians,” Charles said after arrival. “Throughout her life since her first visit to Canada in 1951, her majesty became very attached to Canada.”

The Associated Press and The Canadian Press contributed to this report.