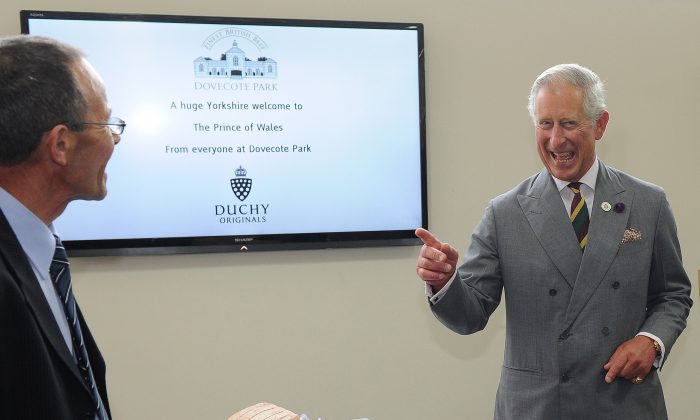 Britain's Prince Charles, Prince of Wales reacts after being given a joint of beef after his tour Dovecote Park in Pontefract, West Yorkshire on July 22, 2013. He said after the royal birth that he's excited to be a grandfather. (Andrew Yates/AFP/Getty Images)
Royals

Prince Charles, the Prince of Wales, said that he and his wife “are overjoyed at the arrival of “their first grandchild, after Princess Catherine gave birth on July 22.

“Both my wife and I are overjoyed at the arrival of my first grandchild,” the prince said in a statement. ” It is an incredibly special moment for William and Catherine and we are so thrilled for them on the birth of their baby boy.”

Being a grandfather will be special, he said.

“Grandparenthood is a unique moment in anyone’s life, as countless kind people have told me in recent months, so I am enormously proud and happy to be a grandfather for the first time and we are eagerly looking forward to seeing the baby in the near future.”

The baby was born at 4:24 p.m. and weighs 6 pounds 6 ounces, and is both third in line for the British throne and will eventually become Supreme Governor of the Church of England. No name has been chosen yet for the boy.