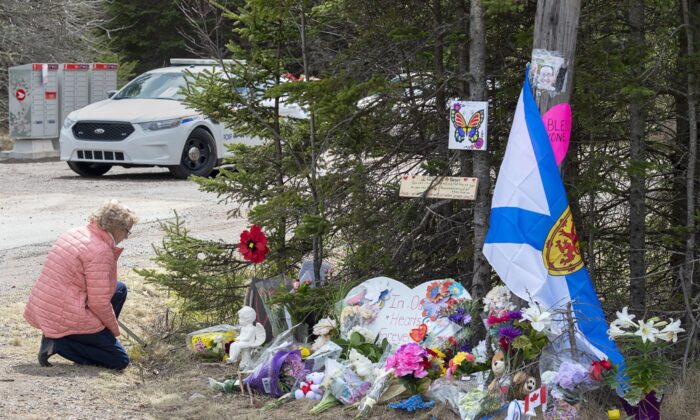 A woman pays her respects at a roadblock in Portapique, N.S., on April 22, 2020. (The Canadian Press/Andrew Vaughan)
Canada

Prime Minister Justin Trudeau is paying tribute to the 22 victims of the worst mass shooting in modern Canadian history.

Two years ago today, a gunman began a two-day rampage in the small Nova Scotia community of Portapique.

In a statement, Trudeau says he joins the people of Nova Scotia and all Canadians in remembering those who lost their lives on April 18-19, 2020.

Nova Scotians have been asked to observe a moment of silence today and Tuesday, while flags on government buildings are flying at half-mast until sunset Tuesday.

Federal NDP Leader Jagmeet Singh tweeted today his thoughts are with the families and friends of the 22 people whose lives were taken.

Trudeau is also paying tribute to Const. Heidi Stevenson, who was killed by the gunman, and to Const. Chad Morrison, who was wounded.

“During one of the darkest days in Canadian history, they, along with the many other first responders, faced danger without hesitation—saving lives and preventing further injury that day,” Trudeau said.

“On behalf of the government of Canada, I invite all Canadians to remember each of those who lost their lives and stand with all those affected by this attack.”

Premier Tim Houston has said legislation will be introduced in the fall to establish the dates of the shootings as provincial days of remembrance.