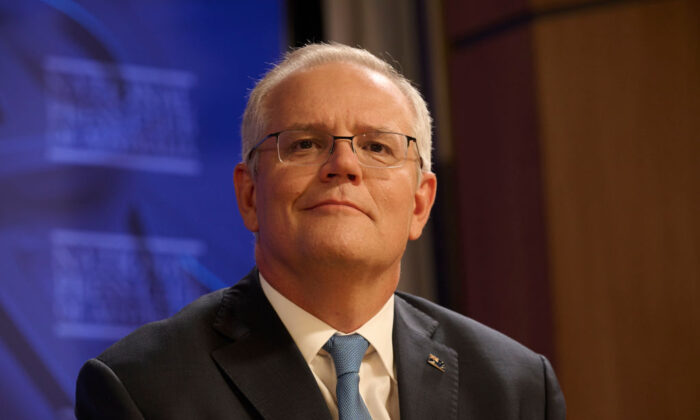 Australian Prime Minister Scott Morrison speaks about his management of the pandemic at the National Press Club in Canberra, Australia, on Feb. 1, 2022. (Rohan Thomson/Getty Images)
Australia

Australian Prime Minister Scott Morrison is optimistic of his chances at the next federal election—which must be held before the end of May—while downplaying ongoing headlines and poor polling results regarding his government.

In an address to the National Press Club on Feb. 1, the prime minister spruiked the government’s record on the economy, and its handling of COVID-19, while admitting mistakes were made along the way.

When questioned on recent disapproval ratings in Newspoll surveys, Morrison responded by saying he had “great trust in the Australian people.”

“There’s a difference between answering a phone and walking into a ballot box and making a decision that has consequences. And I know from my own experience that they know that the security situation we face in the world today is very challenging,” he said.

Morrison’s comments come as Newspoll results over the past few months have reflected poorly on the incumbent prime minister and Liberal-National government.

The Jan. 31 result saw the major opposition party, the Australian Labor Party (ALP), move ahead to 41 percent of the primary vote, compared to 34 percent of the Liberal-National Coalition.

On a two-party preferred basis, the Coalition also trailed the ALP with 44 percent of the vote compared to 56 percent, the worst result since Sept. 18, 2019, after Morrison became prime minister.

Australian political polls, which drive much of the news cycle, have typically surveyed samples of around 1,000 to 2,000 individuals (out of a population of 25 million) and rely heavily on phone calls to a curated database.

The methodology proved problematic in the lead-up to Morrison’s surprise 2019 May election victory, where preceding Newspolls and media commentary predicted a loss for the Coalition leader.

However, Big Data analyst, Professor Bela Stantic at Griffith University, bucked the trend that year and correctly predicted a Coalition victory by using artificial intelligence to analyse 2 million Twitter posts in the lead-up to election night.

“My samples are much bigger,” Stantic told news.com.au: “I collected about 2 million relevant tweets from about half a million accounts. It’s a very big sample size from all around Australia.”

He also suggested people were more honest on social media or talking to friends, compared to answering questions on a survey.

Meanwhile, Morrison said Australians would weigh up the consequences and “carefully consider” the Coalition and the ALP.

“Australians, in between elections, they tend not to focus too much on politics—because they’re focused on what matters most to them, rather than the political goings-on in this place (Canberra),” he said.