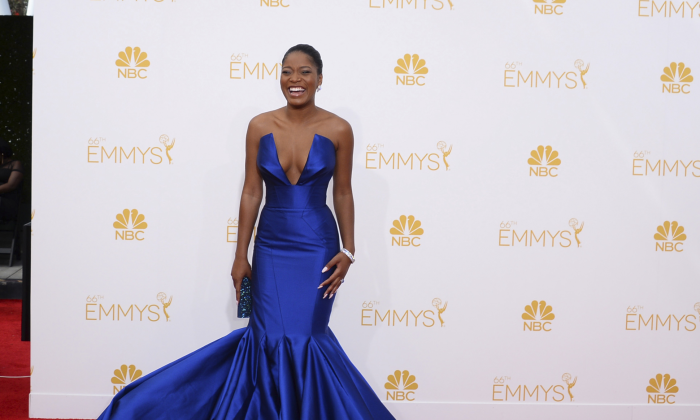 Primaries at the Emmys

There was an air of “take the bull by the horns” when it came to the colors chosen by the stars who attended Monday’s Emmy Awards.

As a result, this year’s fashions have been awash with primary colors—red being the most prominent. Was there something in the air? Have the Emmys ever seen so much red? Perhaps not.

There was white as well.

Roberto Cavalli adorned Sofia Vergara in a white gown worn by the sultry screen siren as only she can.

On the opposite scale of the design spectrum, “House of Cards” actress Robin Wright, wore a cream Ralph Lauren jumpsuit tuxedo. It had an air of the masculine, counter balanced by more than a touch of feminine vulnerability, given the plunging lapels in the jacket which, incidentally, was also missing most of its back.

Julia Roberts was nothing if not fun and flirty wearing a marine blue Elie Saab Haute Couture. It was studded with balls that shone in various shades of greens and blues. The mid-thigh A-line skirt showed off her other great assets (apart from her eyes and smile), all tanned and svelte, topped off with satin heels in the same shade of blue.

Was she channeling a beach-blonde mermaid with a penchant for barnacles? We don’t mind one bit. She was radiantly happy and youthful.

But it was the red gowns, in sheer number and diversity, that took the fashion spotlight at this year’s Emmys.

Julia Louis-Dreyfus might have won the Emmy for her lead comedy role in Veep, but in the fashion stakes she had serious contenders in the most prominent category of the night—the red, red gown. Here she was up against Claire Danes, Minnie Driver, Kaley Cuoco-Sweeting, January Jones, Christina Hendricks, and even model Heidi Klum, who all embraced the explosive color.

By far January Jones of “Mad Men” rocked the most edgy, elegant red outfit of the night in a strapless red gown with a raised front hemline, at the perfect height to show off the black strappy heels. The black graphic inserts highlighted her waistline and gave Jones the perfect silhouette with a touch of relaxed sophistication.

Not the same can be said for her co-star Christina Hendricks whose one-shoulder red satin Marchesa creation was a blend of over-the-top tailoring and embellishments that lacked balance. We could have lived with the Hendricks’ look from the waist up—the tailoring in the bodice, her old gold earrings and Hendricks’ radiant face and locks. But it all goes pear-shaped from the waist down. Blame this one on the stylist.

Uzo Aduba of “Orange is the New Black” showed off her toned … everything in a Christian Siriano gown that was both restrained and fun with a flouncy train at the back.

Keke Palmer of “The Trip to Bountiful” was all woman in the vibrant blue architectural Rubin Singer dress—if there was one event to strut the mermaid silhouette, the Emmys is it. Topped off with Chopard jewels, Jimmy Choo shoes, and a Swarovski clutch, it was the second best blue of the night—Roberts owned the blue camp.

Then there was Lena Dunham. The bulky outfit might have looked good in Giambattista Valli’s couture runway show, on a one-size-below-zero model, but Dunham looked like she was all but drowning in the multi-layered pink-to-red ombre tulle. This one might just end up being fuel for comedy.

Giambattista Valli Couture was also the designer of choice for Michelle Monaghan who wore a white long sleeve gown with a front slit—this Valli was a stunner and it fit Monaghan to a “t,” not only in size but also in overall allure.

What could be called Zuhair Murad’s ode to decoupage, in white, seemed to have been poured onto Camilla Alves. The gown was flattering in all the right places and left just enough to the imagination—but it worked.

Zac Posen arrived with the statuesque Heidi Klum in the most elegant, simple, and ravishing red gown, but he also outfitted Lucy Liu in a cream number reminiscent of 1930s Hollywood diva gowns that celebrated womanly curves. Liu was all softness and light with hair to match.

Kate Walsh completed the primary color trifecta in a yellow Stephane Rolland Couture outfit that might have had a flounce too many, but she looked dramatic and statuesque. Yellow is not the easiest color to wear and not for the faint hearted.

We try not to pick winners, but given our designated roles as avid watchers and compulsive judges, we conclude that the 2014 Queen of Emmys Fashion goes to January Jones. A close second is Julia Roberts, and the third place has too many contenders to mention.

Fashion’s waves of brightness seem to always be followed by the opposite. Let’s just hope that the Oscars will not be the occasion for a backlash—or should it be black-lash?