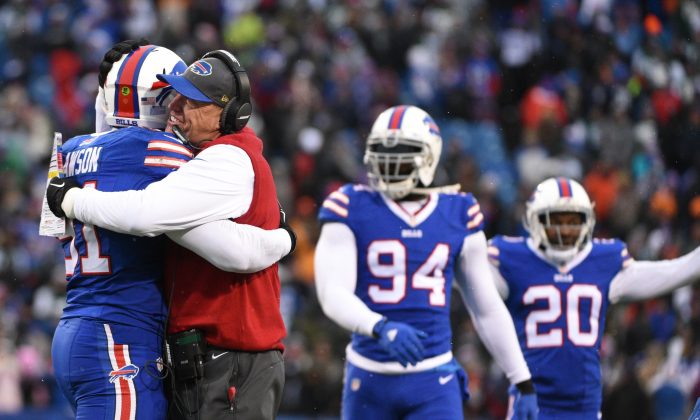 Buffalo Bills head coach Rex Ryan may have seen his team finish outside of the playoffs but he beat his former team twice. (AP Photo/Gary Wiepert)
NFL

The Pittsburgh Steelers could not have made the playoffs without help from the Buffalo Bills, who knocked off the New York Jets—the team Pittsburgh was competing with for the last playoff spot.

Teams needing help from teams outside of playoff contention to get into the playoffs is common in the NFL. Pittsburgh got that help, so for at least the next week or so, the Steelers and Bills can be considered “brother” organizations, per the following tweet:

So what was the gift to the Bills for their generous contribution?

The Pittsburgh-bred sandwich shop really did package and send boxes of its famous staple to the Buffalo front office.

Primanti’s sandwiches are unique in that besides coming with a slab of meat, you also get a serving and french fries and cole slaw in between the buns.

Sammiches are on their way from us to you, @buffalobills. #ThanksFromTheBurgh (and the @Steelers, too!) pic.twitter.com/AGCkH23Qui

@primantibros @buffalobills I love this. Grew up in Buffalo and live in Pittsburgh; the people are cut from the same cloth.

Nothing like a “Thank You” note with some fries and coleslaw on it. 👍 https://t.co/fi1L3AQKP6