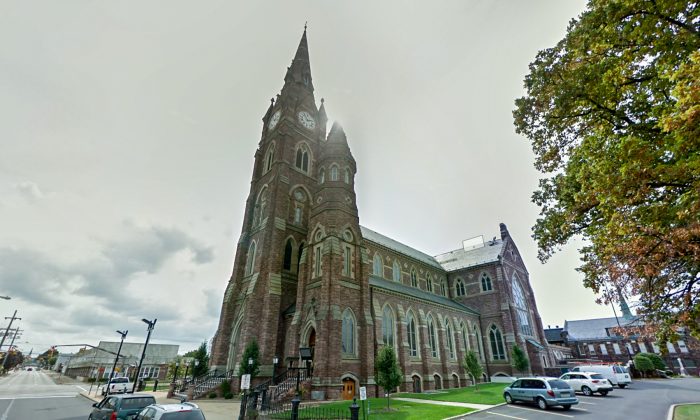 St. Peter Cathedral, in Erie, Pennsylvania, where a priest called the police after a man confessed to murder. (Screenshot via Google Maps)
Crime and Incidents

A man was arrested on March 8 after he told a priest that he murdered his wife and wanted to go home and kill himself.

John Paul Grazioli was peacefully taken away by police after Rev. Michael Polinek of St. Peter Cathedral in Erie, Pennsylvania, convinced him to report the crime to police and helped to put distance between Grazioli and the firearm he had in his coat pocket, WCVB reported.

“He was a little distraught and, after a moment, he pretty much just said I need to tell you that I killed my wife and I am going to go home and kill myself,” said Polinek, via Go Erie. “After a little while, I was able to convince him for the sake of the rest of his family and other people that it would be a good idea to call the police — 911.″

In this case, the Roman Catholic priest was not obligated to keep the confession confidential because it was made informally. Grazioli did not request the confidentiality that would protect the private confession of sins, WCVB reported.

Polinek described how he was able to get Grazioli away from the weapon he walked in with, via Go Erie.

“I called 911 and they said, ‘Does he have a weapon?’ He shook his head that he did. I said, ‘Where is it?’ I believe he said ‘It’s in my coat.’ I said, ‘Why don’t we take your coat.’” said Polinek. “I took his coat and set it on the floor and that way, I was between him and the coat. I never looked in the coat. It felt like there was something in it. The police came and took it, but there was no threat.″

Grazioli’s killed his wife, 31-year-old Amanda Schmitt, with a gunshot to the back of the head. Grazioli left a note at the scene that he killed his wife and himself. The murder weapon was a handgun purchased a month ago that Grazioli did not have a license to carry, the Altoona Mirror reported.

Before Grazioli went to the cathedral, he already called his ex-wife and told her he killed Schmitt and was going to kill himself. But he decided to go to the cathedral after he got off the phone. Police were already searching for him, but the priest’s actions allowed them to pinpoint and capture him, according to the Altoona Mirror and Go Erie.

Grazioli was involved in a battle for custody of the two children he had with his ex-wife, and Schmitt was scheduled to testify in that case, on March 19, before she was murdered, Go Erie reported.

Grazioli is currently in Erie County Prison on charges of “homicide, first-degree murder, aggravated assault, reckless endangerment, possession of the instrument of a crime and carrying a firearm without a license,” according to Go Erie.