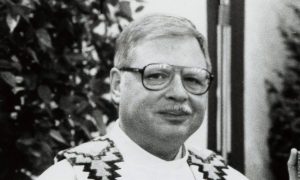 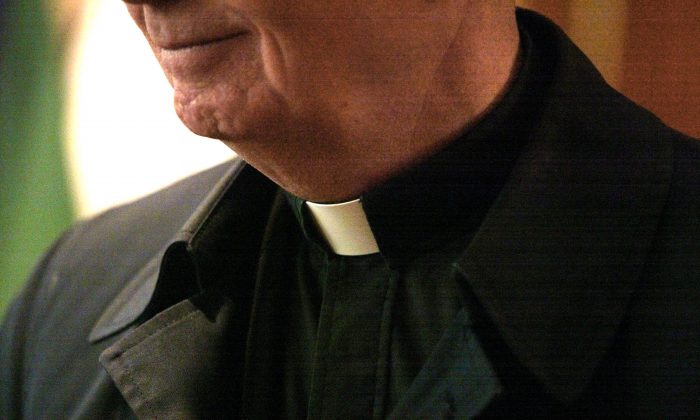 The collar of a priest is seen at St. Adalbert Catholic Church March 29, 2002, in Chicago. (Tim Boyle/Getty Images)
US News

A defrocked priest accused of sexually abusing children over decades was found dead in his Nevada home with a single bullet wound to the neck.

The name of John Capparelli, 70, was recently published on a list along with 187 other clergy that have been been “credibly accused” of abusing minors in Newark, according to the Roman Catholic Archdiocese of Newark.

Capparelli died of a single bullet shot to his neck, the Clark County Coroner’s Office in Nevada said, according to reports.

Police found his body in the kitchen of his home in Henderson during a welfare check on the morning of March 9, reported NBC.

He had been accused of groping teenage boys in lawsuits but had never faced criminal charges related to the allegations.

He was permanently removed from ministry in 1992, then defrocked. His teaching license was subsequently revoked in a settlement, according to USA today.

He had never publicly acknowledged wrongdoing.

He fled to his new home after he was accused of molesting children..but it looks like someone tracked him down

In 2016, he moved from New Jersey to the town of Henderson, about 15 miles away from Las Vegas, in Nevada, where his body was found on March 8.

Henderson Police Department said that investigators have not identified a suspect, according to the New York Times, but they were “following up on developed leads” and cited “suspicious circumstances” surrounding his death.

Robert Hoatson, who runs a  nonprofit, which aids sexual abuse survivors, said he has helped some of Capparelli’s alleged victims.

“The murder of the former priest John Capparelli is shocking and sad,” Hoatson told USA Today. “That’s not the way we want people to be handled. We want them to go through the proper procedures. We hope the victims are taking care of themselves and that the murderer is brought to justice.”

One of those alleged victims,  Rich Fitter, told the Newark Star-Ledger, “The world is a safer place without him.”

A former N.J. priest accused of groping young boys was found shot to death in his Nevada home. One of his alleged victims says the world is a safer place now that he's gone.

“The guy had a 40-year record of abuse. Whatever lead to his death, it’s a certain amount of karma.”

The local Star-Ledger had covered Capparelli extensively for years in the city of Newark.

A lawsuit was filed against Capparelli in July 2011 by Andrew Dundorf, who accused him of abuse spanning over a decade, including at trips to Disney World and a Boy Scouts camp where Capparelli worked. The lawsuit was settled for an undisclosed amount.

In the same year, the Star-Ledger uncovered the fact that back in 1989 Capparelli was sent to a New Mexico treatment center that specialized in alcoholism and pedophilia.

The Star-Ledger revealed that he had been hired as a math teacher at a public high school in Newark in 2011 when allegations against him began to surface again.

Fitter wants to know if Capparelli continued his alleged abuses after he moved to Nevada in 2016.

“I can’t see a change,” Fitter said. “I’ll be very interested to see what police find in his house … I don’t see that type of sociopath and predator changing.”