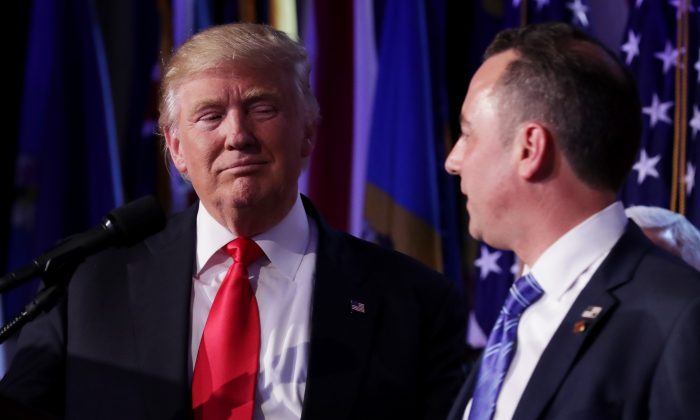 In bringing Priebus and Bannon into the White House, Trump is making overtures to both traditional Republican circles and the party’s anti-establishment wing, which helped fuel the businessman’s political rise.

Bannon was notably given top billing in the press release announcing the appointments, a curious arrangement giving that White House chief of staff is typically considered the most powerful West Wing job.

Under Bannon’s tenure, the Brietbart site pushed a nationalist, anti-establishment agenda and became one of the leading outlets of the so-called alt-right—a movement often associated with white supremacy and a defense of “Western values.”

Neither Priebus nor Bannon bring significant policy experience to their new White House roles. Chiefs of staff in particular play a significant role in policy making, serving as a liaison to Cabinet agencies and deciding what information makes it to the president’s desk. They’re often one of the last people in the room with the president as major decisions are made.

Together with Vice President-elect Mike Pence, the triumvirate will lead Trump’s transition to the White House and help guide his presidency, Trump said in a statement.

“I am thrilled to have my very successful team continue with me in leading our country,” Trump said. He called Priebus and Bannon “highly qualified leaders who worked well together on our campaign and led us to a historic victory.

Priebus called the appointment “an honor” and predicted the billionaire “will be a great president for all Americans.”

The appointments came after a day in which Trump’s tough-talking plan to rein in illegal immigration showed signs Sunday of cracking, with the president-elect backing off his vow to build a solid wall along the southern U.S. border and Ryan rejecting any “deportation force” targeting people living in the country illegally.

After Trump told CBS’ “60 Minutes” that his border wall might look more like a fence in spots, the combative billionaire took to Twitter to settle some scores.

During a four-hour spree, Trump savaged the New York Times and gloated about the GOP stalwarts lining up to congratulate him, bragging that staunch critics and GOP rivals John Kasich, Mitt Romney and Jeb Bush had sent attaboys. Former presidents George W. and George H.W. Bush also had sent their “best wishes on the win. Very nice!” The New York Times, Trump wrote to his 14 million followers, is “dishonest” and “highly inaccurate.”

As Trump revenge-tweeted, threats flew between power brokers, and protests across the country continued.

The president-elect retreated from the campaign promise that had inspired his supporters to chant “Build the wall!” at Trump’s massive campaign rallies.

EU Foreign Ministers to Gather to Grapple With Trump Impact

Would he accept a fence in some spots on the border? In an interview to be aired Sunday, Trump told “60 Minutes”: “For certain areas, I would, but certain areas, a wall is more appropriate. There could be some fencing.”

Excerpts of the interview were released in advance.

Trump also had vowed to immediately deport all 11 million people living in the country illegally. But in the interview, he said he’s focusing first on ousting or incarcerating 2 million to 3 million “that are criminals and have criminal records, gang members, drug dealers.” Trump emphasized that securing the border is his very first immigration priority.

On that, Ryan agreed. But on CNN’s “State of the Union,” Ryan rejected the kind of “mass deportations” Trump had championed during the campaign.

“We are not planning on erecting a deportation force,” Ryan said.

More tension emerged Sunday when Trump’s campaign manager, Kellyanne Conway, said Senate Democratic Leader Harry Reid should be careful in a “legal sense” about characterizing Trump as a sexual predator. When asked whether Trump was threatening to sue Reid, Conway said no.

But Adam Jentleson, Reid’s deputy chief of staff, said Trump is “hiding behind his Twitter account and sending his staff on TV to threaten his critics.”