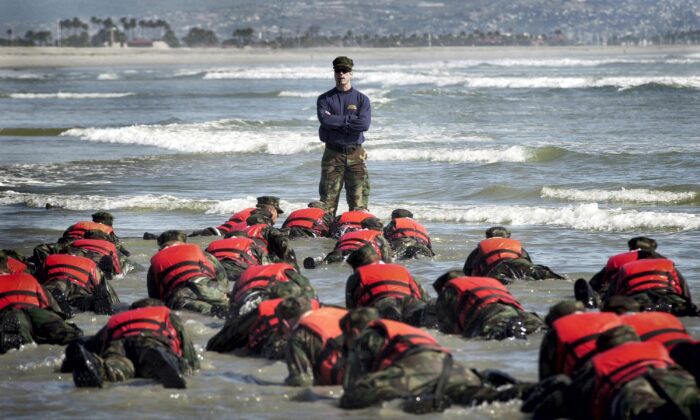 The word has several definitions. It can mean tiny pieces of dirt or rock, as in “The wind filled my eyes and nose with grit.” Some people use it to describe a redneck: “That grit has never left the farm.” (By the way, lest you think my use of redneck insulting or gratuitous, I grew up with them, and several times in my life, a good old boy has hauled me out of a sea of troubles.) Some employ grit to mean nasty or gross, as in “Joe is so grit!”

None of those definitions apply here.

No—grit for my purposes refers to anyone with spunk, courage, determination, and the willpower to see a task or obligation through to the end. Grit is a word I love, the way its sound matches its meaning, a flinty-eyed intrepid single syllable.

Grit is also a character trait I much admire in others.

When I think of grit, the first people who come to mind are some members of our Armed Forces: the Navy SEALs, the Green Berets, the Army Rangers, the Air Force Special Operations force. Those who undergo Navy SEAL training, for example, nearly all credit not their physical strength for enduring that ordeal, but their absolute refusal to give up and seek an easier berth. They dig down and find within themselves reserves of willpower missing in their comrades who quit the training. After leaving the military, several of these SEALS have written books or made podcasts designed to inspire others to hold fast under tremendous pressure.

The protesters in Hong Kong display a different kind of grit. They have taken to the streets to battle for liberty. They understand what’s coming down the pike, they see the future the Chinese Communist Party intends for them, and so they wave American flags, sing our national anthem, and vow in the face of all odds to stand up for freedom. Some are arrested, some beaten, and all, we may be sure, will be written down as enemies of the state. But they keep on fighting.

Some of our presidents have grit. Whatever we may think of him, President Donald Trump is one of them. Not since Abraham Lincoln has a sitting president suffered such a deluge of personal attacks. Assailed daily by his political opponents, by Hollywood stars, and by the mainstream media, smeared with such labels as racist, misogynist, and anti-Semite, Trump keeps pushing his agenda and battling back. Like Gene Tunney and Muhammad Ali, two of boxing’s great counterpunchers, Trump manages, again and again, to slip an opponent’s punch, exploit the opening, and unleash a barrage of his own.

Given a similar pounding, most of us would have long ago caved.

Nikki Haley, a former governor of South Carolina, also showed courage and stamina while serving as U.S. ambassador to the United Nations. She accused that body of ganging up on Israel, she repeatedly opposed Iranian aggression and policies in the Middle East, and she took positions unpopular with other member nations.

Most of us have friends or family members who possess this trait. I know an attorney in his mid-30s who had the chutzpah to open his own office a year after graduating law school and now owns five offices across his home state. He rises before dawn every morning, works out in a shed beside his house, manages his office and practices law, and has, along with his wife, adopted six of their seven children.

I know of an elderly man, a Cambodian physician, whom the Khmer Rouge hauled out of his hospital, imprisoned him along with millions of others, and forced him to work like a slave in the fields. One day, he’d had enough, walked into the jungle, and eventually made it to the West.

I once knew a woman who spent two months dying of cancer of the liver. Never once did she complain. Several times, she welcomed into her home old friends who had come to say goodbye, always playing the gracious hostess. She took as few pills as possible, willing to endure the pain to keep her thoughts unclouded. Determined to die in her own bed, surrounded by her husband, her children, and several grandchildren, she refused the idea of expiring in a hospital. She remained in her right mind until just a few hours before her passing. A woman of deep faith, she taught those around her how to face death.

That was also my mother.

At the end of “The Bridges at Toko-Ri,” a war movie based on James Michener’s novel by the same title, Rear Adm. Tarrant watches his pilots fly from the deck of a carrier and remarks “Where do we get such men? They leave this ship and they do their job. Then they must find this speck lost on the sea. When they find it they have to land on its pitching deck. Where do we get such men?”

The same question might be asked of those with grit. How do they come by it? What factors drive them to overcome so many obstacles?

Pride inspires the SEALs and their comrades-in-arms in other military services to complete their training.

A love of liberty stiffens the spines of the Hong Kong protesters.

A refusal to be intimidated surely accounts for the bold stands of Trump and Haley.

Children who need special care, food, and clothing pull the young attorney from his bed every morning.

Desperation and hope guided the doctor who walked away from the killing fields.

In other words, grit is the offspring of many parents. But whatever its source, when we encounter that special blend of courage, willpower, and resolution, we stand in awe of its undaunted valor.

Actor John Wayne, famed for his Westerns, including “True Grit,” once said, “Life is getting up one more time than you’ve been knocked down.”

I think that’s as good a definition of grit as any.