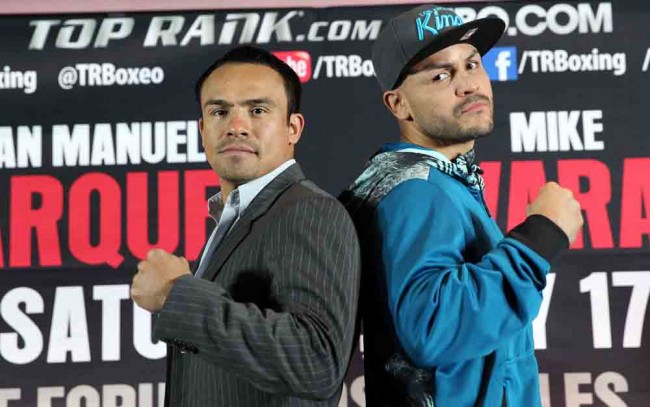 Juan Manuel Marquez (left) and Mike Alvarado (right) at a press conference for there May 17th match up. (bing.com)
News

In order for Juan Manuel Marquez to win this fight he is going to have to use what he is known for, his counter punching. Marquez is going to have to stay back and let the heavy handed Alvarado come after him. Marquez is arguably the best counter puncher in the history of the sport, and to beat Alvarado he is going to have utilize that skill this Saturday. Marquez’s best offensive weapon is his straight right hand. When you put Marquez’s countering skills against the way Alvarado fights (straightforward), Marquez should be able to land it all night. In Marquez’s last fight against Timothy Bradley he was bested by Bradley’s speed and boxing ability. What Marquez has going for him is experience, and the fact that Alvarado’s style plays right into his counter punching hands. For Marquez this fight maybe his last shot, because if he loses his career just might be over.

Mike Alvarado’s goal is exactly that, to make sure fans never see Juan Manuel Marquez in a boxing ring again. What Alvarado needs to do in order to win this fight is box. If Mike Alvarado try’s to press Marquez, and if he tries to knock him out, he is going to be doing exactly what Marquez’s wants him to do. Alvarado is going to have to use his length, and stay on the outside in order to stop Marquez from using his superior counter punching. Mike Alvarado best bet is to take a page from Bradley’s book, and stay on the outside. If Alvarado does decide to stand with Marquez and fight on the inside, not only could Alvarado get beat on the score cards, but he could also get knocked out.

This fight for Mike Alvarado may not be his last chance, but it is his best chance right now, to throw himself back into a big fight picture, and retire a legend. For Juan Manuel Marquez this fight could potentially be his last. Marquez’s goal is to not only win, but put himself in line for one more big fight before his career is over. There is an old saying in boxing that styles make fights. With the way Marquez fight, and with the way Alvarado fights, Juan Manuel Marquez vs Mike Alvarado could be one heck of a fight.