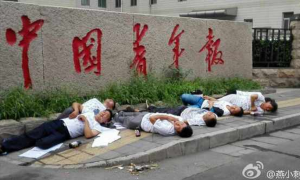 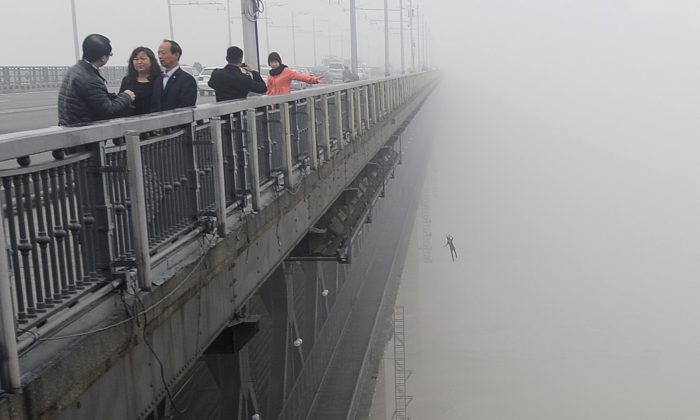 A young person jumps from the Yangtze River Bridge in Wuhan, China, into the river following another person who committed suicide minutes before on Feb. 27, 2013. Police said there was little chance for them to survive and one of the two was a young male who was born in May 1993. (STR/AFP/Getty Images)
Opinion

Suicides among youth have been a significant problem in many countries, but those happening in some Asian countries are a particular cause for concern. In the last few years several studies have shown that adolescents and young people in China, Japan, and other Asian countries confront a large number of psychological problems that may lead them to commit suicide. Will these countries be able to curb those suicides that are becoming a mirror of societies in crisis?

In Japan, suicide is the leading cause of death among adolescents. The number of adolescent suicides in Japan exceeds 30,000 every year. At 24 suicides per 100,000 people of all ages, Japan has double the rate in the United States and three times that in the United Kingdom, representing the highest rate among developed countries. The most vulnerable group for suicide attempts and mortality is ages 15–24.

Most of those who attempt suicide, both males and females, have an underlying psychiatric disorder. Among those, many of them have been diagnosed with a Borderline Personality Disorder (BPD). Bullying at school, stressful lifestyles, and economic problems are increasingly becoming important triggers for adolescent suicide in Japan.

In China, suicide is the fifth leading cause of death, and is the leading cause of death among young people. It is estimated that 287,000 people—or one every two minutes—commit suicide every year in China. Ten times that number attempt it but are unsuccessful, according to the Chinese Center for Disease Control and Prevention.

In 1897, Emile Durkheim, a French sociologist, was among the first to notice that there is a higher suicide rate among those individuals who are not socially integrated and don’t have family and social support. His observations may apply to many Chinese students who attempt suicide, who move from the interior to the country’s main cities and lack the support of their friends and families.

There are several causes for adolescent suicides. In many cases, those who commit suicide are afraid of performing badly on their exams. Some experts believe that in China the one-child policy could also explain the rise in young people’s suicides. Because adolescents grow up with no siblings, they are not used to dealing with difficult interpersonal problems. In many cases, they are under the combined pressures of work, study, and personal problems.

Despite the supposedly extraordinary performance of the Chinese economy in recent times, many young people are unable to find jobs (or jobs according to their qualifications and experience) and enter into depression, which lies behind the high number of suicides. Many graduates are unable to find jobs, even a year or more after they have graduated.

The high number of suicides among adolescents is also related to the extreme pressure from their families to perform well in school and excel in their studies. In addition to those pressures, adolescents experience feelings of isolation and loneliness, which make them prone to attempt suicide.

Is it possible to lower the high rates of adolescent suicides, given the complexity of the problem? I believe it is possible if parents, teachers, and friends can pick up signs of distress among the young. Certain characteristics—such as depression, conduct disorders, and situational crises—are associated with increased risk of suicide.

Young people may have some particular behaviors that indicate their intention to commit suicide. Among those behaviors are changes of appearance and conduct toward their friends. Others may also be making some final arrangements such as giving away prized possessions or making suicidal threats through direct or indirect statements.

Because children and adolescents spend a substantial amount of time at school under the supervision of school personnel, school staff should be trained on the importance of risk factors and warning signs of suicidal behavior. Teachers should give special classes discussing the problem of adolescents’ suicides, alerting students to the need to look for help when they feel stressful and feel unable to cope with their personal problems. At the same time, there should be increased communication among parents, teachers, and school staff.

A good approach would be the creation of crisis prevention teams (CPT) made up of representatives from students, parents, and school administration that should be in charge of following students whose behavior raise concerns. In addition, students should have easy access to effective medical and mental health resources. Through a combined and comprehensive set of actions, what is threatening to become a serious public health problem can be effectively controlled.

Dr. César Chelala is an international public health consultant and the author of “Health of Adolescents and Youth in the Americas.” He is also a co-winner of an Overseas Press Club of America award.