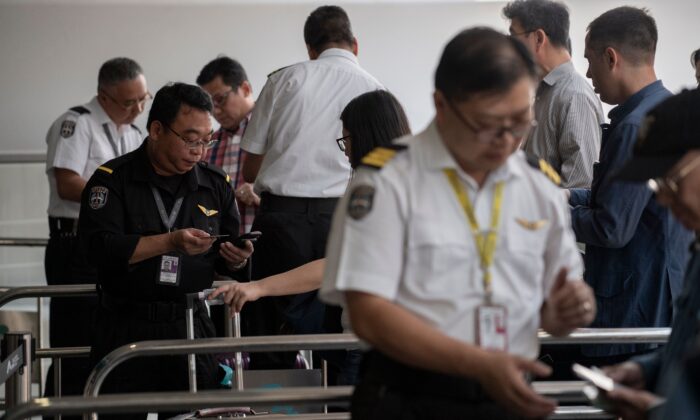 Owning one or more fake ID cards has long been a “must-have” for many high-ranking Communist Party officials and it is easier for them to forge and obtain ID cards in and from the Public Security Bureau through the Party’s privileges. Some of them have used fake ID cards to transfer bribery money, while others used them for escaping from China to avoid being investigated by the regime.

On Jan. 17, Wang Fuyu, a ministerial-level Communist Party official, was sentenced to death on bribery charges, suspended for two years, had all of his personal property confiscated, and was fined 1 million yuan ($160,000), according to official media.

In the process of accepting bribes, Wang Fuyu used fake IDs for his brother and himself to open multiple bank accounts and deposit hundreds of millions of dollars in bribes.

Wang Fuyu, 70, served as deputy secretary of the party committee and Chairman of the Political Consultative Conference in Hainan Province and Guizhou Province. The court found that Wang had used his position to accept property worth 434 million yuan ($68.45 million), and also used his influence to accept 17.35 million yuan ($2.74 million) after retirement.

On Dec. 29, 2021, China’s Supreme Procuratorate announced that it had filed an indictment against Wang Lee ker, the former secretary of the Jiangsu Provincial Political and Legal Committee. The prosecution charged Wang with four counts of accepting bribes, offering bribes, harboring, conniving in a triad organization, and forging identity documents.

In China, you’ll see advertisements everywhere saying “apply for fake documents.” Wang Taiyuan, a professor at the Department of Public Security of China’s Public Security University, told official media Global People that such identity documents are fake and cannot be traced in the system—documents forged by the police through powers within the scope of authority can be traced in the system—making them hard to detect and thus more harmful.

In January 2013, a citizen of Lufeng City, Guangdong Province, reported Zhao Haibin, a member of the Party Committee of Public Security Bureau in the city, for using a false identity to run a business and own 170 properties according to state-run CCTV.

The investigation showed that Zhao did have two ID cards, one was his own as a CCP official, while the other had an alias, the same photo, different ID number and residence, and was used to operate a commercial business. Although his business identity was plagued by financial disputes, Zhao remained in his official post without any accountability for those financial troubles.

Lufeng city’s Discipline Inspection Commission in Guangdong Province announced that it had opened an investigation into Zhao, but seven years later no results are evident. As of November 2020, Zhao was still working for the local police.

For fugitive officials, the importance of a false identity is obvious. Officials who leave the country using their real passports are usually detained at customs.

According to the BBC, in 2016 Yang Xiuzhu, the former deputy director of the construction department of Zhejiang Province and former deputy mayor of Wenzhou City, is suspected of embezzling 250 million yuan (nearly $40 million).

Like many corrupt officials, Yang also prepared a fake ID to apply for a valid passport so she could flee the country if necessary. In 2003, Yang went from Shanghai Pudong Airport to the United States via Singapore. She was denied political asylum in the United States, but the judge did not deport her on the grounds she could be tortured. In Nov. 2016, Yang surrendered to the Chinese Communist regime, returned to China, and was sentenced to eight years in prison.

Huang Dong, the former principal and party secretary of Zhaoqing city Agricultural School in Guangdong Province, married his first wife in 1978 and had a daughter; in 1990, Huang forged a name to marry another woman and had two daughters and a son; in 2003, he used another name and married a third woman and had a son. In this way, Huang has registered three marriages with the CCP’s civil affairs department, has married three women, and has five children calling him father, according to Southern Metropolis Daily in 2005.

In Sep. 2004, Huang, who had hidden more than 7 million yuan ($1.1 million), was sentenced to 18 years in prison for bribery, unexplained property, and bigamy, and all his personal property was confiscated.

Nowadays, it is popular for CCP officials to have a second, third, or more wives. But bearing legal responsibility, like Huang, is rare among the Chinese Communist officials.

According to China News, in early 2001, Chen Xin, an accountant at the Chongqing branch of the Industrial and Commercial Bank, absconded with more than 40 million yuan ($6.3 million) of the bank’s money. Chen moved around Sichuan, Guangdong, and Hainan before leaving the country for Vietnam and then Myanmar. During his 68-day escape, Chen posed as different people using a total of 29 fake ID cards.

Chen was arrested and sentenced to death. Compared to Wang Fuyu, who is still alive after receiving $450 million yuan ($70 million) in bribes as described at the beginning of this article, the logic of the CCP’s thinking is that Chen Xin’s position is so small that he can be punished severely to show that the CCP laws are fair and to shock the people.

Fake ID and a Death Sentence

In China, the first high-ranking official to be implicated for using a fake ID card was probably Hu Changqing, the former vice head of Jiangxi Province.

On Aug. 6, 1999, Hu led a delegation to attend the Kunming Expo in Yunnan Province. He appeared on TV that night, but the next morning he had suddenly disappeared.

The CCP’s organization department of the Central Committee finally deployed police officers to retrieve him from Guangzhou, 1,400 kilometers (870 miles) away. It turned out that Hu had left quietly and used a fake ID card to fly and check into a hotel. His unusual behavior alerted the top brass of the CCP.

Li Yuanhua, a former professor at Capital Normal University, told The Epoch Times that fake IDs are all too common among CCP officials, whose main purpose is for corruption, and to facilitate escape from China.

“Almost all the officials are stained as corrupt officials under the CCP system,” Li further explained, “why China is full of counterfeit goods and fake things can spread in society is also because the prime character of the CCP’s ideology is “‘fake.’”

CCP officials are afraid that evidence of their corruption will be found by their political enemies.

“If their corrupt superiors fall, they will be rippled [caught in the tide] soon, so they are always ready to flee,” Li said.

Kane Zhang attributed to this report