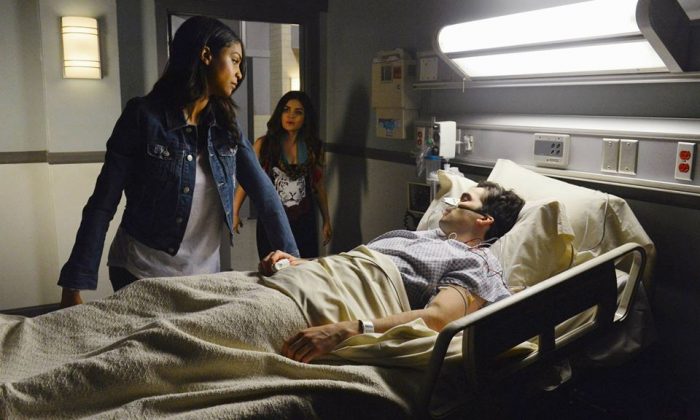 The season will consist of 25 episodes.

The new season will feature the PLLs dodging their dreaded nemesis “A” while navigating a world with Alison back in it.

Check out some other key facts about the season below the episode 1 synopsis.

“Moments after where the season four finale left off, Aria and the Liars are reeling from Ezra’s shooting at the hands of ‘A.’ The five girls quickly realize that as the one person who truly knows A’s identity, Ezra is in grave danger. While Aria stands watch over Ezra at the hospital, Alison and the PLLs lay a trap to finally flush out ‘A’ but are shocked by who is ensnared.

“Meanwhile, Holbrook steps up his efforts to find the girls and puts the Hastings family on alert. And as news of Alison’s resurrection spreads, Mona is not pleased.”

-Several characters will return in the 100th episode.

Caleb Rivers (Tyler Blackburn) will be back and will be a series regular again after the episode. Jenna Marshall (Tammin Sursok) will also return after not being seen since the ninth episode of season 4.

-Also, a new character will enter the midst–Sydney Driscoll.

Driscoll (Chloe Bridges, CW’s The Carrie Diaries) will be the newest member of the swim team and will befriend Emily, reported The Hollywood Reporter. She’ll first appear in episode 3 of this season.

“There are so many story lines going on and we tried to wait for the right time to bring back Lucas in an organic way. This is a great season to bring him back,” executive producer Marlene King told TVLine.

-The addition of Alison is part of a reinvention of the show.

“It’s a new approach to the show,” executive producer Joseph Dougherty told THR. “We’ve all felt it when we we’ve written episodes with Ali that aren’t flashbacks.”

-There are trust issues related to the return

“Season five has a lot to do with figuring out allegiances in the new dynamic and how Rosewood is going to function when Ali comes back,” explained Dougherty. “It’s going to be about who you can trust.”

-The Liars aren’t the only ones who have to deal with Alison’s resurrection.

“Lucas, Paige, Noel Kahn, everybody who was tangled under her web,” King said. “Do we get sucked back in? What do we do? How do we deal with it? That’s what’s going to be interesting to see how it plays out. Does this group need a leader? Does this group want a leader?”

-The identity of who shot Enzo will be revealed.

It will be shown “very early” in the season,” King said.