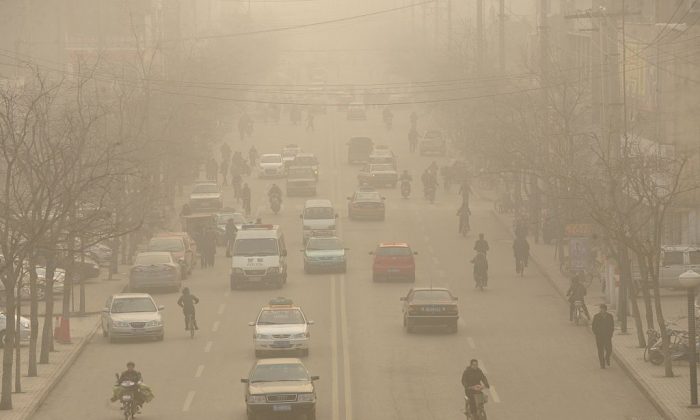 Smog down a main street of Linfen, a city in China's Shanxi Province, on Dec. 9, 2009. (Peter Parks/AFP/Getty Images)
Chinese Regime

In recent years, Beijing has placed top priority on reducing smog and air pollution. Officials are rewarded if pollution is reduced in their jurisdiction, usually with promotions up the political ladder.

A recent national political meeting by the Chinese Communist Party, however, reveals that purported achievements in air quality improvement could be fake, as Chinese officials have been found tampering with the equipment for collecting environmental data.

On July 9, at the fourth work meeting for the standing committee members of the 13th National People’s Congress, China’s rubber-stamp legislature, Congress chairman Li Zhanshu addressed the issue of fraud in environmental quality monitoring, according to a June 9 article on the official WeChat account of the state-run newspaper Beijing Daily. WeChat is a popular social media platform.

Li, who is among the Party’s top leadership, highlighted one municipality, Linfen City in northern China’s Shanxi Province, where tampering with environmental monitoring equipment took place at six monitoring stations from April 2017 to April 2018. The equipment in question recorded PM2.5, PM10, and sulfur dioxide levels.

PM2.5 and PM10 are air quality indices, with the former meaning the density of particles smaller than 2.5 micrometers and the latter meaning particles less than 10 micrometers. According to an air quality guide issued by the U.S. Department of State, the air is hazardous when the density of PM2.5 reaches between 301 and 500. People should be advised to avoid outdoor activities at that threshold.

Sulfur dioxide is a harmful compound found in vehicle emissions as a result of fuel combustion.

The environmental data fraud in Linfen City centered around Zhang Wenqing, former chief of the environmental bureau at the Linfen municipal government, who was sentenced to two years in prison for his fraud scheme by a local district court in May. Fifteen other co-conspirators were also sentenced, including Zhang Wei, Zhang Wenqing’s subordinate, who received a one-year sentence.

Beginning in April 2017, Zhang Wenqing and his subordinates hired a group of staff to tamper with data gathered at the six monitoring stations, according to a detailed report by the state-run Southern Weekly. Zhang secretly provided the staff with key cards that allowed them unrestricted access to the stations to tamper with the equipment.

Pressured by the central authorities’ mandate to improve air quality, the staff came up with creative schemes to make it happen. To make the recorded levels of PM2.5 and PM10 lower, the staff used filter papers or pieces of cloth to partially block the equipment’s air inlet so that fewer particles would be registered. To reduce the level of sulfur dioxide detected, the staff sprayed water or other solutions, such as sodium hydroxide, into the air near the equipment.

The staff would remove any evidence of tampering before 7 a.m. to avoid getting caught. The six stations were run and monitored by a contracted company, Hebei Sailhero Environment High Tech. Two of the company’s employees were among the 15 who were sentenced in May for colluding with Zhang and receiving bribes from him in exchange for providing “conveniences” to his staff.

With the staff’s tampering, Linfen City reported a dramatic decrease in PM2.5, PM10, and sulfur dioxide between October 2017 and April 15, 2018—a reduction of 39.7 percent, 34.4 percent, and 67.1 percent, respectively, compared to the same time period a year ago. Linfen City’s air quality improvement thus “outperformed” all other areas in Shanxi Province.

The case in Linfen City is hardly an isolated event. According to a June 27 report by state-run media Xinhua, China’s Ministry of Ecology and Environment conducted an environmental inspection from May 30 to June 7. In the 10 provinces inspected, including Hebei, Inner Mongolia, and Heilongjiang in northern China, the eastern coastal province of Jiangsu, and southern China’s Yunnan Province, 208 investigation cases were established and 235 people were detained on suspicion of wrongdoing.

The inspection found problems such as officials making superficial efforts and “a bureaucratic environment” that prevented real improvements from happening.

And in Xinhua District of Shijiazhuang, the capital of Hebei Province, the subdistrict office, a low political division of the Chinese Communist Party (CCP), hired security guards to stop all trucks from entering a section of one local road so that the trucks’ emissions would not be detected by a nearby environment monitoring station, according to a Nov. 4, 2016, report by Xinhua. An official with the subdistrict office said the Shijiazhuang environmental bureau gave orders to set up the roadblocks.