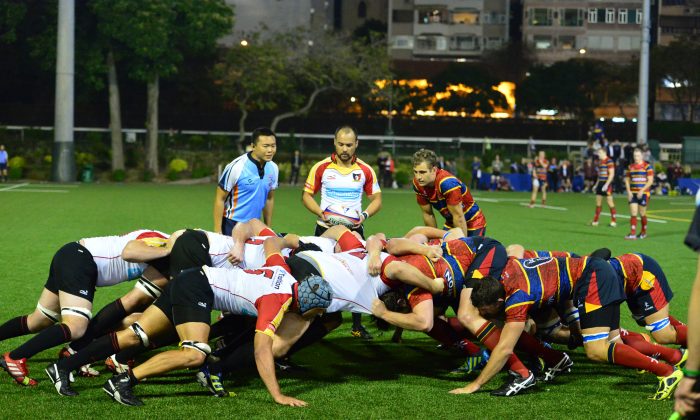 Who will crack under pressure? HKCC (right) and Valley are poised for an intense HKRFU Premiership Grand Final this weekend. The two teams are seen here in their Jan 7, 2014 match where Valley won by the narrowest of margins 22-21. (Bill Cox/Epoch Times)
International

King’s Park will be a pressure-cooker as battle-hardened Hong Kong Cricket Club and Valley Rugby Football Club meet in the last match of the 2013-14 domestic rugby season.

Hong Kong’s best two teams all season will fittingly face off in the Grand Final this weekend when Leighton Asia HKCC and WhichWay Valley play to decide who will be crowned Grand Champion at King’s Park next Saturday Mar 8.

The team that can apply the most pressure, tempered by who can handle the heat and keep up the work-rate, will be the difference as both teams come into the Final well-tuned.

It is notable for Valley that they have not been beaten by HKCC this season and should take confidence in the fact that they more than just match-up well against the season’s standing’s winners.

HKCC will also start confident having finished the home-and-away season at the top of the standings and comprehensively defeating Hong Kong Scottish 34-3 in their Semi-final at Aberdeen Sports Ground on Saturday (Mar 1).

There were concerns that HKCC might start a bit flat following the high from the week before when they pipped Valley in the standings by 1-point in the last round –they earned a bonus point while thrashing Club 36-nil. But Cricket Club started where they left off.

“Hong Kong Scottish played well, but we weathered the pressure that they exerted on us and the big thing is that we backed up from last week from the highs and elation against a side that were really hitting their straps and gunning for it,” said HKCC Director of Rugby and Head Coach Andy Hall, in a HKRFU press release.

Despite dominating the scoring Hall identified an area for improvement.

“Our lineout wasn’t flash today so we will have to address that in the week. But I was pleased with most aspects of our game,” said Hall.

Meanwhile, it won’t be one-way traffic as Valley, coming off a hard-fought 22-18 win against Abacus Kowloon the week before, also won convincingly against Newedge Club 25-3 in the other Semi-final at Happy Valley.

“We were very clinical in everything we did today and the main thing was we controlled the breakdown,” Hewson said.

But Club’s Director of Rugby Kevin West put it down to the battle-hardened pressure that Valley brought to pitch, which made the difference.

“They put us under an incredible amount of pressure and the errors came,’ said West.

“We have been in a comfort zone for the past few weeks having secured our third place in the league, while Valley have been fighting it out and been under pressure as they tried to win the league.

“When it ramped up today, we couldn’t handle the pressure which led to mistakes. Also their defence was amazing. They are a physical side and we suffered with their work-rate at the breakdown where we were a little bit under-powered,” West said.

Valley won the same amount of games in the season as HKCC. Significantly, Valley won 12-lost 2-drew 1, while HKCC had a 12-3-0 record in the season’s matches. Despite this, Valley came second to HKCC by the narrowest of margins earned by bonus points.

Accordingly, the pair were neck-and neck for most of the season and have been playing tough, uncompromising, pressure football to crack the opposition’s defence and attack, while battling it out for first-place honours.

Put simply, HKCC and Valley are the form teams of the competition—making this weekend’s Final all the more enticing.