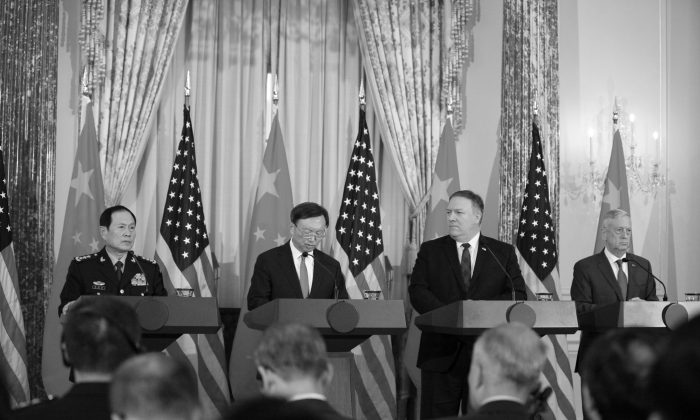 (L-R) Defense Minister General Wei Fenghe, Director of the Office of Foreign Affairs of the Central Commission of the Communist Party of China Yang Jiechi, Secretary of State Michael Pompeo, Secretary of Defense James Mattis as the U.S.-China Diplomatic and Security Dialogue in Washington on Nov. 9, 2016. (Jennifer Zeng/The Epoch Times)
US News

WASHINGTON—After the U.S.–China Diplomatic and Security Dialogue in Washington on Nov. 9 revealed how far apart the two nations remain on vital issues, an expert says the United States and its allies must use all available means to modify the attitudes and behavior of the Chinese Communist Party (CCP).

Joseph Bosco, former China country director of the office of the Secretary of Defense, said that since its creation, the CCP has been dedicated to the defeat of the West, starting with Mao Zedong’s wars of national liberation.

“Half a century later, the world is even less safe because Communist China has not changed fundamentally—it still sees the West as its implacable enemy, and thanks to many foolish and gratuitous concessions, it is far more powerful than ever,” Bosco said.

At the joint press conference following the dialogue on Nov. 9, Secretary of State Mike Pompeo said, “The United States is not pursuing a Cold War or containment policy with China.”

Bosco believes that because of the CCP’s unchangeable nature, “U.S. policy, and that of its allies, must be to use all diplomatic, political, economic, and security pressures to modify the attitudes and behavior of the CCP.

“As in the Cold War with the Soviet Union, if that approach also fails, the West must seek not only to contain, but to undermine the Communist regime and assist the Chinese people in removing and replacing it with a moderate, civilized, democratic system, such as exists in Taiwan, Japan, South Korea, and elsewhere in Asia.”

At the joint press conference, while both sides stressed that the dialogue was a “productive conversation,” on issues such as the South China Sea, Taiwan, and human rights in China, there are still fundamental differences.

When talking about the South China Sea, Pompeo said: “I was clear, for example, that we have continued concern about China’s activities and militarization in the South China Sea. We pressed China to live up to its past commitments in this area.”

His counterpart Yang Jiechi, Politburo member and director of the Office of Foreign Affairs of the Central Commission of the Communist Party of China, said: “China has undertaken some constructions on its islands and reefs. Most of them are civilian facilities. The purpose is to serve the interest of the Chinese people and also to provide public goods to others.

When talking about Taiwan, Pompeo said, “Regarding our strong ties with a democratic Taiwan, I reiterated the U.S. policy has not changed and that we are concerned about China’s increasing efforts to coerce others, constraining Taiwan’s international space.”

Yang said: “Taiwan independent forces and their separatist activities pose the biggest threat to peace and stability in the Taiwan Strait. The U.S. should recognize it clearly.”

“To achieve the unification of China is one of the historical missions of our party and our country,” Wei said. “If Taiwan is split from China, we will defend China’s unification with all means possible and at any cost, just as the U.S. did in the Civil War.”

When talking about human rights, Pompeo said, “I stated the United States and the international communities will continue to express our concerns with respect to China’s repression of religious groups—Christian, Buddhists, and 800,000 to possibly millions of Muslims who have been denied their freedoms.”

Yang offered a different view: “In China, people have the freedom to believe or not believe in religion. They are all Chinese citizens. Their human rights have been fully respected and protected. It is our hope that the United States could respect the fact.”

He said, “Matters related to Xinjiang are China’s internal affairs. Foreign countries have no right to interfere.”

Bosco’s takeaway from those differences is that the United States and its allies must be much more upfront and transparent in supporting human rights in China.

“Compromising our basic principles, our very identity as a country, so as not to offend ‘the feelings of the Chinese people’—i.e., the fears of the Communist leaders—is self-defeating, both morally and strategically,” Bosco said.

“The outrageous cultural genocide of the Uyghur and Tibetan peoples—taking place before the eyes of the world—is a historic turning point for the West in its dealings with the People’s Republic of China. We should seize the opportunity to make human rights in China a major cause for the world. If there is moral and political unity, the CCP cannot retaliate against all.”

President Donald Trump has recently expressed strong opposition to socialism. Yang said in the joint press conference, “The Chinese side stresses that China is firm on pursuing socialist—socialism with Chinese characteristics.”

Yang then stressed the “rejuvenation of the Chinese nation” and the CCP’s commitment to “a community with a shared future for mankind.” Both of these terms are interpreted as the CCP’s intention to promote and spread its “China model” to the world.

“There is no doubt U.S. credibility on all the major issues challenging the US-China relationship has been enhanced under the Trump administration,” Bosco said. “But the U.S. position must be sustained unrelentingly in the face of constant PRC pressure to weaken it by a combination of bribes, threats, flattery, and other inducements.

“With the team that the president has put in place, there is reason for confidence, but the greatest tests lie ahead,” he added.