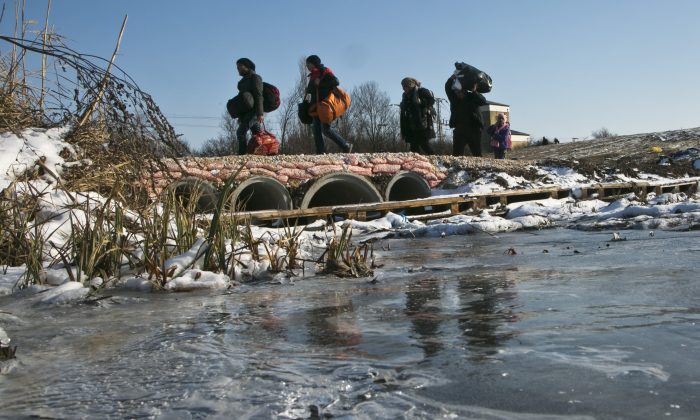 Migrants carrying their belongings across a partially frozen stream as they walk from the Macedonian border into Serbia, near the village of Miratovac, Serbia, on Tuesday, Jan. 19, 2016. (AP Photo/Visar Kryeziu)
Europe

BRUSSELS — Pressure built on Wednesday for European Union leaders to overcome their differences and tackle the refugee emergency amid criticism that Europe’s migrant strategy is unraveling fast.

The head of the EU’s executive commission expressed concern on Wednesday that a summit of EU leaders on Feb. 18-19 would be too focused on keeping Britain inside the bloc, and he recommended that government heads give equal focus to the challenges posed by the migrant influx.

His call came as countries in northern Europe, the preferred destination of many of the more than 1 million people who arrived last year seeking sanctuary or jobs, began calling for caps on the number of migrants that should be allowed to enter.

European Council President Donald Tusk, who chairs EU summits, warned on Tuesday that the EU’s passport-free travel area could break apart if the migrant strategy is not sorted out within two months.

The commission has floated a plan aimed at coping with Europe’s biggest refugee emergency in more than half a century. Ideas include the relocation plan to distribute refugees among EU nations, which would be strung out over two years, and more than 3 billion dollars over two years plus fast track visa and EU membership process for Turkey in exchange for stopping people leaving for Europe.

The commission also advocates tougher measures to return people who don’t qualify for asylum, and has boosted funding of Frontex border agency.

A new European border agency plan is to be rolled out in March to protect the frontiers of countries unable or unwilling to do so.

Juncker lamented the lack of national action, saying “we would do better if we implemented what has been decided.”

The mass arrivals last year, mostly through Greece from Turkey, overwhelmed border authorities and reception centers and raised tensions between EU neighbors as they struggled to respond.

More than 2,000 people are still arriving daily, according to EU figures, and numbers are expected to accelerate as spring arrives.

A spokeswoman for the U.N. refugee agency, said that around 2,000 migrants continue to cross from Macedonia into Serbia daily, even with temperatures plunging to a low of -19 C (-2 F) Wednesday.

Liene Veide said many arrive ill-prepared, without clothing or boots appropriate for winter weather. Some have pneumonia, fever or other illnesses, but she said most refuse hospitalization and press on with their journeys.

Temperatures plunged overnight Wednesday in Romania to the lowest of the year, with -29.5 C (-21 F) recorded in one town in central Romania

Meanwhile Austria’s deputy chancellor, Reinhold Mitterlehner, was quoted Wednesday as saying that his conservative party wants to cap migrant entries to no more than 40,000 per year.

Close to 90,000 refugees applied for asylum last year in Austria.

Germany’s president, Joachim Gauck, called for limits to the number of people entering, saying that ceilings are “morally acceptable” if Europe is to continue helping those in need.

Speaking at a conference in Davos, Switzerland, Gauck said the EU’s rules on freedom of movement throughout the bloc “can only be guaranteed if movement is controlled at the external borders.”