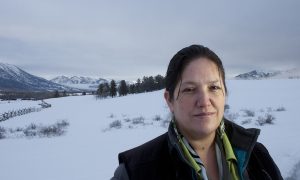 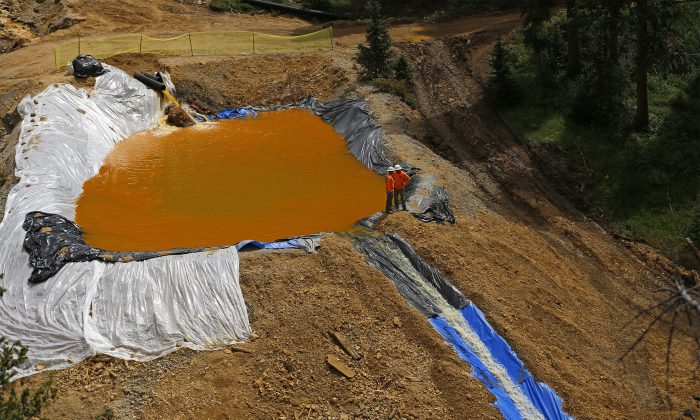 Environmental restoration employees work at a temporary water treatment holding facility at the Gold King Mine north of Silverton, Colo., on Monday, Aug. 10, 2015. (Jon Austria/The Daily Times via AP)
US

Pressure Mounting on EPA to Be Accountable for Gold Mine Spill

The EPA is bracing itself for a barrage of potential lawsuits resulting from its bungled release of more than 3 million gallons of toxic wastewater into the Animas River from an abandoned Colorado gold mine. The agency implemented a claim process on Tuesday to navigate the large number of expected complaints.

Speaking with reporters at the scene of the spill on Tuesday morning, Aug. 11, EPA representative Hayes Griswold said an EPA cleanup team was attempting to remove material from the roof of the Gold King Mine on Aug. 5 in order to stick a pipe into the top for drainage, according to USA Today.

The crew accidentally removed too much material and dislodged the plug.

Although the state released a little more than $1 million for water testing and emergency relief efforts, Martinez and Begaye anticipate the state and the Navajo Nation will need a lot more support to recover from the adverse impact on water supplies for drinking and other domestic uses, agriculture, recreation, and wildlife.

Bedaye issued a Navajo Nation state of emergency on Sunday, Aug. 9, after San Juan County issued an emergency declaration and closed the San Juan River until further notice. In a press release, the Navajo president announced his intention to take legal action against the EPA.

“We intend to make sure the Navajo Nation recovers every dollar it spends cleaning up this mess and every dollar it loses as a result of injuries to our precious Navajo natural resources,” he said during a community meeting in Shiprock, New Mexico.

Shiprock, a small part of the Navajo Nation, which is the size of West Virginia, is one of its largest farming communities and it relies heavily upon irrigation from the San Juan River. Members of the community talked about their struggles to survive and emphasized the importance of farming and ranching to their way of life, according to the press release. The Navajo Nation irrigation systems stopped pulling water from the river last week.

Martinez echoed the Navajo president’s call for legal action. In a press release on Monday, the governor directed administration officials to be prepared to sue the EPA, citing her concern over the “EPA’s lack of communication and inability to provide accurate information.” The EPA had initially estimated that 1 million gallons of the metal-laden water was released, but later announced more than 3 million.

It is absolutely devastating, and I am heartbroken by this environmental catastrophe.
— Susana Martinez, governor, New Mexico

Martinez declared a state of emergency on Monday, Aug. 10, and directed a multiagency team to continue providing on-the-ground support for an indefinite period of time. “It is absolutely devastating, and I am heartbroken by this environmental catastrophe.”

Martinez is expecting long-term effects from the spill, which contains high levels of heavy metals, including aluminum, arsenic, cadmium, cobalt, lead, and mercury. She anticipates subsequent damage to infrastructure, resources, and property will pose a significant threat to the health and safety of citizens and visitors to New Mexico.

The EPA has taken full responsibility for the spill and implemented an online claim process to compensate residents who have suffered personal injury or property damage. In a media update released Monday, the EPA stated that the plume associated with the mine release had dissipated and “there is no leading edge of contamination visible in downstream sections of the San Juan River.”

The agency has also taken steps to capture and treat the discharged wastewater and reports cleaner water levels at Cement Creek, where the spill originated. Officials are conducting daily water testing and assessments, so far reporting that there is no indication of widespread fish contamination in the San Juan.

The EPA is coordinating with tribal, state, and local officials to determine when access to the rivers can be restored based on sampling data, risk-screening levels and other related factors.