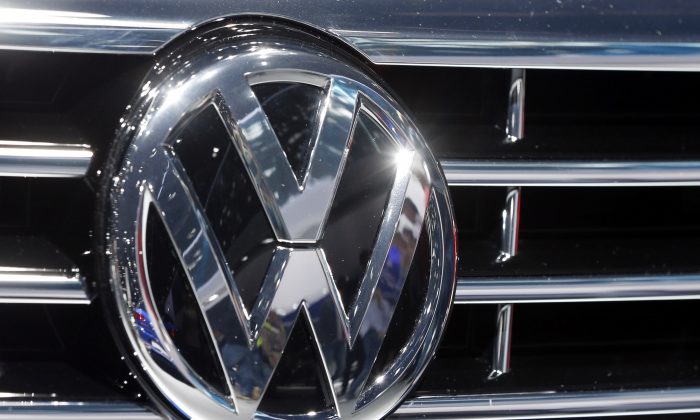 The logo of Volkswagen at a car is photographed during the Car Show in Frankfurt, Germany, on Sept. 22, 2015. (Michael Probst/AP Photo)
Business & Markets

FRANKFURT, Germany—The fallout from Volkswagen’s emissions-cheating scandal intensified Wednesday, as investors bailed out and European regulators pressured VW to quickly disclose the findings of an internal investigation. In the U.S., the company halted sales of seven models that allegedly were part of the cheating.

On Tuesday, VW admitted that it had understated the carbon dioxide emissions for 800,000 cars, widening the scope of a scandal that has forced the ouster of a CEO and prompted investigations and lawsuits on several continents.

The company has been unable halt the flow of bad news since mid-September, when the U.S. Environmental Protection Agency said Volkswagen had installed software on 482,000 cars that enabled them to cheat on emissions tests for nitrogen oxide, a pollutant that contributes to smog and respiratory problems. The software reduced emissions when the car was on a test stand.

Volkswagen acknowledged that 11 million vehicles with small diesel engines worldwide have the software—but only after denying its use for more than a year.

On Monday, the EPA charged that Volkswagen also used cheating software in some cars with larger diesel engines, including Volkswagen’s elite Porsche brand. Volkswagen has denied that claim, but over the past two days halted sales in the U.S. and Canada of the models involved: the Volkswagen Touareg, Porsche Cayenne, and the Audi A6, A7, A8, Q5 and Q7.

Late Tuesday, VW said it had also found “unexplained inconsistencies” in emissions from some of its vehicles of carbon dioxide. The cars were sold under the Volkswagen, Audi, SEAT and Skoda brands, most of them in Europe and none in the United States.

The company said the carbon dioxide problem could cost it 2 billion euros ($2.2 billion), on top of 6.7 billion euros it had already set aside to cover the costs of recalls. Analysts say the total costs in fines and lost sales could be several times that.

Amid concerns over the escalating costs, the German carmaker’s ordinary shares slid 9.5 percent to close at 100.45 euros. The shares have tumbled 23 percent since the scandal was revealed, and VW’s total value has fallen $26.3 billion to $57.21 billion at Wednesday’s euro-to-dollar conversion rate.

The EU’s executive Commission told Volkswagen to speed up its investigation, which is being led by law firm Jones Day.

“Public trust is at stake here,” spokeswoman Lucia Caudet told reporters on Wednesday. “We need all the facts on the table.”

The commission has enforcement powers to ensure that manufacturers respect their obligations in terms of carbon dioxide emissions, including the possibility of imposing fines.

Germany’s transport minister indicated that VW will be on the hook for the costs of higher car taxes following the revelation that carbon dioxide emissions were understated.

Transport Minister Alexander Dobrindt noted that Germany’s car tax is calculated on the basis of engine size and carbon dioxide emissions, and so “if these vehicles emit more CO2, over and above the respective limit, that makes a new calculation necessary.”

Dobrindt also said VW is responsible for finding a solution where “customers face neither extra costs nor effort.”

Of the 800,000 vehicles found to have excessive CO2 emissions, 98,000 had gasoline engines, Dobrindt said. Up until now, the scandal had only involved diesel engines.

The widening scandal also prompted Moody’s Investors Service to cut the rating on the Volkswagen’s debt, which could make borrowing money more expensive for the company. The agency cited “mounting risks to Volkswagen’s reputation and future earnings” from this week’s new developments.

VW CEO Matthias Mueller has promised the company will “relentlessly and completely clarify the matter.” He has said the company must re-examine its corporate culture to prevent such missteps from occurring again.

The news that Porsche vehicles might also have had the deceptive software is a potential embarrassment for Mueller, who headed Porsche before he became CEO.

Mueller has said that upper management would not have involved itself in the details of software development and has pointed to “a few” employees who altered the software code.