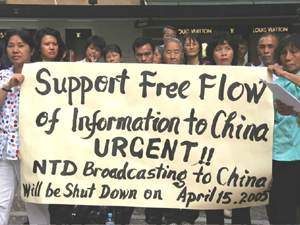 In March 2004, the New York-based TV network, New Tang Dynasty TV (NTDTV) signed a broadcasting agreement with the London Satellite Exchange, an agent of Europe’s largest satellite company, Eutelsat SA, to lease an Asian Beam from its W5 satellite and transmit NTDTV’s signal to Asia and China. For people in mainland China, this was the first time in history that they were able to watch TV programs uncensored by the Chinese Communist Party (CCP).

The Eutelsat SA was also praised by politicians of the European Union, several European countries and the United States for signing this agreement. However, after one year of successful cooperation, the Eutelsat SA unilaterally decided not to renew the lease with NTDTV, though the W5 Asia Beam still had a huge capacity. The programs that NTDTV broadcasts to China will have to be temporarily stopped.

NTDTV and Reporters Without Borders held a press conference in Brussels recently on this matter, calling European politicians and media to support independent media and the free flow of information. NTDTV requested that Eutelsat SA abide by the European constitution of international TV broadcasting and the constitution of the Eutelsat SA, and respect the principles of equal access, diversity and non-discrimination under Article 3 of the convention governing a company of this kind, to ensure fair broadcasting and protect the rights of independent media.

The spokesperson for NTDTV indicated that the real cause which led to Eutelsat SA’s decision was pressure from the CCP. In December 2004, the Chairman of Eutelsat SA, Guiliano Berretta, declared he had signed an “historic partnership agreement.” In the same month, NTDTV was told that their lease withW5 satellite would not be renewed.
Since the inception of NTDTV, it has been singled out and suppressed politically, financially and diplomatically by the CCP. All satellite companies which made business partnerships with NTDTV have been greatly pressured by the CCP. In addition to political and diplomatic threats, the CCP also entices these companies with rich profit incentives in order to terminate their agreements with NTDTV and stop the programs of NTDTV.

In July 2003, the “Public Access Satellite Channel” which signed an agreement with NTDTV, after transmitting NTDTV’s program for several days, received heavy pressure from the CCP. It then encrypted the signal of NTDTV.

The Netherlands-based satellite operator New Skies Satellites (NSS) was also pressured by the CCP, which threatened “if you do not immediately blackout NTDTV’s program, NSS will suffer enormous financial reprisals.” NSS was then forced to encrypt the signal preventing Chinese satellite dish owners from seeing the channel.

In May 2004, NSS further removed NTDTV’s Asian program. Some United States and European satellite companies after receiving large contracts from the CCP, refused to allow NTDTV to broadcast to China via their satellites.

In the beginning of 2004, Manila based Mabuhay Philippines Satellite Corporation was forced to cancel the transmission of the First NTDTV Chinese New Year Gala due to threats from the CCP, right before they were about to broadcast it.

It is noted that NTDTV is a rare Chinese TV network which does not give in to the news censorship of the CCP. Its programming ranges from culture, entertainment, independent news and information, reports on human rights and on political, economic and social issues of China. Its style of “speaking what others dare not to speak” has been regarded as a spike by the CCP. Recently NTDTV is intensively broadcasting the series of Nine Commentaries on the Chinese Communist Party (Jiuping) . Jiuping has evoked a tide of withdrawal from the CCP and has therefore created a shock response in mainland China.

NTDTV uses an unencrypted signal and decoding is not needed. Its transmission covers Europe, North America, East and Southeast Asia. Tens of millions of satellite dish users in China are able to receive NTDTV’s program. After Eutelsat SA unilaterally ends the contract under pressure from the CCP, NTDTV’s broadcasting to China will end.